Update Required To play the media you will need to either update your browser to a recent version or update your Flash plugin.
By VOA
21 April, 2014

Vietnam is working to meet goals for food production and food security. In doing so, the government supports use of pesticides and other chemicals on crops. Farmers use these substances to help crops grow, and to protect them from insects and other threats.

Signs around Vietnam carry the message "don't abuse pesticides, think of the buyer." But the government has fewer rules restricting the use of the pesticides. Some Vietnamese are so worried about the issue that they buy food only from growers they know, or they buy food online. 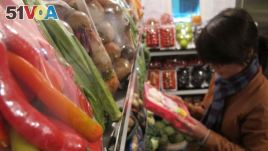 A shopper reads packaging on vegetables on sale at Veggies, a grocery shop in central Hanoi listed on a website providing consumers with information on where to buy "safe" vegetables, March 28, 2014. (Marianne Brown/VOA)

Tran Thuy Nhat is a 30-year-old mother who lives near Hanoi. She shops in the city center, but she worries about pesticides, so she buys vegetables only from people she knows in her village. If she did not, she says the food could harm her baby.

Not everyone knows a trust for the farmer, but there is a website that can help. It lists stores in Hanoi that sell "safe vegetables". The Vietnamese buyers group Vinastas set up the website in 2011.

Dang Kiem Hien is part of the team that runs the site. Ms Hien says stores have to meet requirements to be included on the website. For example, they have to prove that they get there vegetables from farmers who do not use chemicals. Ms Hien says a store will be removed from the list, if it does not obey the rules.

Eduardo Sabio is with VECO, a Belgian non-government agricultural group. It supports the local website. Mr Sabio says pesticide misuse in Vietnam is a real problem.

"The government has a list of pesticides that are allowed, but almost always there are "illegal" pesticides that get over the border and get to the farmers," Sabio said.

Mr Sabio says the Vietnamese safe food website uses what is known as the Participatory Guidance System. It supervises food safety through quality reports from farmers groups, traders and local officials. The system is used in more than 20 countries around the world. And Mr Sabio says Vietnamese farmers keep detail notes about their pesticide use as well as that of neighboring farmers.