Update Required To play the media you will need to either update your browser to a recent version or update your Flash plugin.
By Hai Do
04 February 2021


Vietnam launched preparations for the Lunar New Year with a fish release on Thursday. The tradition involves releasing fish called carp into rivers and lakes in the country a week before the the holiday known as Tet officially begins.

The tradition comes from an ancient story of three "Kitchen Gods." The three, two males and a female, take a ride on the brightly colored carp at the end of the year. They go to Heaven to meet with the Jade Emperor, the God who rules there. The Kitchen Gods report news about the families they represent to seek the emperor's care and protection. Their efforts help to keep the kitchen fires burning, and families happy and healthy.

As the gods go to Heaven, families clean their houses in preparation to celebrate Tet. A clean house, Vietnamese believe, will bring luck in the new year. On Lunar New Year's Eve, the gods will return to earth and their duties in the kitchen of the house.

"Releasing the fish makes me feel better about myself," said Nguyen Hong Nhung of Hanoi. "It's like I've done a good deed, so I'll be luckier in the new year." 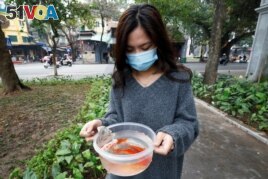 A woman prepares to release carps to Hoan Kiem lake on Kitchen God's Day as part of the traditional Vietnamese Lunar New Year celebrations, the biggest festival of the year in Hanoi, Vietnam February 4, 2021. REUTERS/Kham

Thursday's event, which takes place across Vietnam, was more restrained than in years past because of the new coronavirus. It is spreading in several northern areas of the country.

However, Vietnam has increased contact tracing, mass testing, and quarantine measures to slow the spread. The aggressive action has limited infections in the country to 1,948 cases. Vietnam has reported only 35 deaths from COVID-19.

A fast-spreading coronavirus variant from Britain is the cause of the latest increase in cases.

"Vietnamese will still follow the tradition of releasing the fish, but COVID-19 has made people keep a safe distance," said Tran Van Toi as he released carp from a plastic bag at Hanoi's West Lake.

Thich Tinh Giac, a Buddhist monk, noted, "This year, due to COVID, there are fewer people releasing fish here, but there is a major change in attitude towards plastic bags," Giac said.

"After years of persuasion, now they don't throw the plastic bags into the water anymore but collect them to be recycled."

The Lunar New Year is also celebrated in China, Korea, Laos, Tibet and other Asian countries.

Hai Do adapted this story for Learning English with additional reporting from Reuters. Caty Weaver was the editor.

deed - n. something that is done: an act or action

contact tracing - n. the practice of identifying, notifying, and monitoring individuals who may have had close contact with a person having a confirmed or probable case of an infectious disease as a means of controlling the spread of infection

variant - n. different in some way from others of the same kind

attitude - n. the way you think and feel about someone or something