Update Required To play the media you will need to either update your browser to a recent version or update your Flash plugin.
By Ashley Thompson
21 September, 2018

Vietnamese state media reported that Quang died Friday after a serious illness. He was 61 years old.

Vietnam Television said he died in a military hospital in Hanoi. It added that Vietnamese and international doctors had worked to bring him back to health. 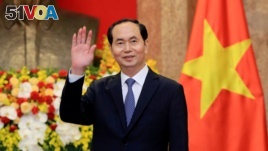 One of the president's last public appearances was last week, during a visit to Hanoi by Indonesian President Joko Widodo. Quang appeared unwell and had difficulty taking steps.

Quang was from a small farming community 115 kilometers south of Hanoi. Before he became president in April 2016, Quang had been minister of public security.

The United States ambassador to Vietnam praised Quang for his efforts to improve ties between the two countries. Ambassador Daniel Kritenbrink noted U.S. President Donald Trump's state visit to Hanoi in November. He added that the trip "helped advance the U.S.-Vietnam Comprehensive Partnership to new heights."

Human Rights Watch had critical comments of the Vietnamese leader. The group's Phil Robertson said that Quang would be remembered for a "crackdown on human rights and putting more political prisoners behind bars in Vietnam than any time in recent memory."

The Communist Party does not permit challenges to its one-party rule and often jails people for peacefully expressing their views. Vietnam, however, says it only puts law breakers in jail.

Vietnam is officially led by four "pillars:" its president, its prime minister, the chief of the Communist Party and the national assembly chair.

A Vietnamese lawyer told Reuters that current Vice President Dang Thi Ngoc Thinh will serve as president until the National Assembly elects a new one.

Ashley Thompson adapted this story based on reports from Reuters and the Associated Press.

pillar - n. a basic fact, idea, or principle of something

advance - v. to move (someone or something) forward

crackdown - n. a serious attempt to punish people for doing something that is not allowed : an increased effort to enforce a law or rule

behind bars - expression. in prison