Vietnamese Say They Were Starved, Beaten by Chinese

Update Required To play the media you will need to either update your browser to a recent version or update your Flash plugin.
By VOA
15 October, 2015


Vietnamese workers in Algeria say supervisors and co-workers from China beat them and refused them food.

The alleged attacks happened last month. They became known last week after the workers asked the Vietnamese government for help. Vietnamese have been writing angry messages online about the alleged attacks. Many Vietnamese are unhappy with China because of border and South China Sea disputes.

Pictures on social media show the injuries two of the workers say they suffered during the attack. 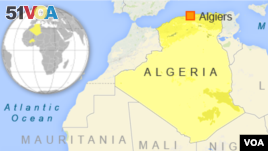 Vietnamese media report the Chinese company they were working for is called Dongyi Jiangsu Co. Ltd. VOA was not successful in its efforts to speak to representatives of the company.

Dao Ngoc Cuong is one of two workers who say they suffered severe injuries. He said he was attacked by a group of his Chinese co-workers. He says they were told by their supervisors to attack the Vietnamese workers.

He says the Chinese workers forced him and his co-workers into their rooms then took him to the office and beat him with canes. He says he and a co-worker suffered broken bones.

Mr. Cuong said he wants to return to his family in Vietnam. He says they are worried about his health. He says he and his co-workers were denied food during the time they were detained and beaten.

VOA asked the Chinese embassy in Algiers for information about the reported attacks, but has not received an answer.

Mr. Dung said more than 2,000 Vietnamese are working in Algeria. That is among the highest number of Vietnamese workers of any country.

The Vietnamese government says more than 500,000 Vietnamese are working in more than 40 countries and territories throughout the world. Workers dispute contracts and promised income.

contract – n. a legal agreement between people and companies or between companies

evidence – n. material that is presented to a court of law to help find the truth about something

Have you ever been in a dispute with your employer? We want to hear from you. Write to us in the comments section or on 51VOA.COM.