Update Required To play the media you will need to either update your browser to a recent version or update your Flash plugin.
By Gregory Stachel
22 September 2022


Viola Davis served as both an actor and producer on a new historical film called The Woman King. She says the Sony Pictures' movie – which tells the story of heroic Black women – was unlike any other project she has worked on.

The movie was first shown at the Toronto International Film Festival earlier this month. It is based on the true story of the Agojie, a real-life group of female warriors. The group protected the African Kingdom of Dahomey in the 1800s.

Academy Award winner Davis told Reuters, "What felt different was ownership, agency, controlling my voice." The actor plays a general who trains the next generation of fighters. 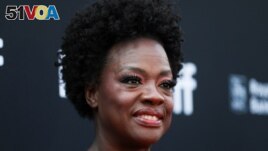 Davis added, "It's our story. There is no white savior in the movie. There's none. We save ourselves."

The film's director was Gina Prince-Bythewood. She said the creative team knew early on they wanted to shoot the movie in Africa to make the story more realistic.

Prince-Bythewood said, "Let's shoot where this took place, have our feet in the soil, allow us to have great scope."

She added, "I knew I couldn't do that with green screen. I didn't want that for the actors. I wanted them to have a 360 environment to play in and make it feel real. I just didn't want anything to take an audience out of the fact that this was a real story [from the] 1800s."

To reach that goal, Prince-Bythewood said the work required mental strength and for everyone to come together like a family.

Davis' co-stars, John Boyega and Thuso Mbedu, have high hopes for audience reactions to the film.

Boyega plays Dahomey's King Ghezo. He believes the film will be well received by audiences and that the actresses will feel personally celebrated.

South African actress Mbedu said, "I'm honored to be a part of telling a story like this that is long overdue, that will hopefully change how society views women, views Black women, views dark-skinned Black women."

The film was released in theaters in the United States on September 16.

allow – v. to permit (something)

scope – n. space or opportunity for action or thought

green screen – n. a green surface used as a background when making a movie or television show

audience – n. a group of people that gather together in one place to watch a movie, watch a music performance, etc.