Update Required To play the media you will need to either update your browser to a recent version or update your Flash plugin.
By Susan Shand
06 March, 2018


Aid efforts for an area of Damascus that is under siege recently had to be cut short when Syrian government forces began bombing the area.

A local council reported that the incident took place in the Ghouta suburb of Syria's capital city. It said government attacks on the area appear to be intensifying.

The council said aid trucks had to leave before they could finish unloading their supplies. 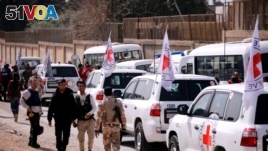 Monday appeared to be the worst day of violence since the United Nations Security Council demanded a 30-day cease-fire for Syria.

A U.N. Security Council resolution was passed unanimously on February 25, but it has not been observed.

The Syrian American Medical Society organization supports hospitals in eastern Ghouta. It said 79 people were killed as the government, supported by Russia's military, pushed its attack on the rebel-held suburbs. The U.N. says nearly 400,000 people are trapped by the violence.

The Britain-based Syrian Observatory for Human Rights reports on the conflict. It said 80 civilians were killed on Monday.

Monday's aid shipment was the first to enter eastern Ghouta after weeks of a siege. Government attacks there have killed nearly 800 civilians since February 18.

Aid agencies, however, said Syrian officials took basic health supplies, including trauma and surgical equipment from the trucks. For years, U.N. officials have protested such actions by the Syrian government.

The U.N. said airstrikes and bombing in eastern Ghouta and the attacks on Damascus continued for hours while the trucks were unloading supplies.

Jens Laerke is deputy spokesman for the U.N.'s Office for the Coordination of Humanitarian Affairs. He said, "After nearly nine hours inside, the decision was made to leave for security reasons." He added that organizers were concerned about the safety of the aid team.

As a result, 14 of the 46 trucks were not able to unload important supplies. Of the 14, four unloaded a small part of their aid before leaving.

Laerke said the team found people who have lived through months of violence and who are desperate for humanitarian aid.

"Food for civilians was in short supply," he said. Laerke also noted that any food was very costly and the aid workers saw evidence of malnutrition.

It is unclear if any additional aid will be possible. Organizers plan to send more aid trucks to eastern Ghouta Thursday. However, Laerke said security must be guaranteed before the trucks leave for the area.

Aid workers from The ICRC, the International Committee for the Red Cross, and the U.N. also had to leave before unloading all their supplies on Monday.

Ingy Sedky is the ICRC spokeswoman in Syria. She said most of the aid from 46 trucks arrived at the town of Douma in eastern Ghouta. But unloading was stopped because of the violence.

Iyad Abdelaziz, a member of the Douma Local Council, said nine aid trucks had to leave the area because of government shelling and airstrikes.

The group, also known as the White Helmets, said that two of its volunteers suffered from breathing problems after the bombing of the town of Hammouriyeh on Monday night.

The group accused the government of using "poison gas." The Syrian Observatory for Human Rights said 18 people suffered breathing problems but did not give a reason.

It was the eighth allegation of chlorine gas use reported by the Syrian American Medical Society this year. Russia has used its Security Council veto to stop the work of a U.N. body investigating reports of the illegal use of gas.

The United States has said it could take military action against the Syrian government for using chemical weapons on its own people.

Russia's Defense Ministry has said it was making an offer to permit armed rebels to leave eastern Ghouta with their families and weapons.

Russia has been a strong ally of Syrian President Bashar al-Assad, helping him gain control of much of the country during its deadly civil war.

On Tuesday, the Associated Press reports that a Russian military cargo plane crashed near an air base in Syria killing all 39 Russian service members on it.

Turkey's foreign ministry said the country plans to build camps in nine areas in northern Syria for refugees from the fighting.

A foreign ministry spokesman said on Tuesday that the camps would be built in an area controlled by Turkish-supported forces. The would also be built in Idlib province where Turkish forces are trying to make a "de-escalation zone." It is part of an agreement reached between Turkey, Russia and Iran.

The spokesman said the camps would host a total of 170,000 people.

Words in this story

siege – n. when a city, building, etc., is surrounded with soldiers who try to take control of it

unanimously – adj. agreed to by everyone

surgical – adj. of or relating to the process of performing a medical operation

de-escalation – n. stopping a bad situation from becoming worse or improving it.