Update Required To play the media you will need to either update your browser to a recent version or update your Flash plugin.
By Mario Ritter
11 May, 2017

One person was killed in the violence. Local politician Ramon Muchacho said 84 people were sent to the hospital.

National Guard soldiers used tear gas and water canons against the protesters, who were trying to march to the Supreme Court. 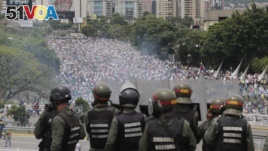 In this May 3, 2017 photo, Bolivarian National Guards stand on a highway overlooking an anti-government march trying to make its way to the National Assembly in Caracas, Venezuela.

Protesters there have reportedly thrown bottles filled with human waste at security forces.

At least 39 people have died since protests started in April. On Wednesday, Miguel Castillo, a 27-year-old college graduate, was killed.

Opposition leaders say he is trying to keep himself and his allies in power.

The unrest appears to be affecting many parts of Venezuelan society -- including health services.

The report was the first released by the Health Ministry since July 2015. It is not clear why the ministry restarted publishing its weekly report.

President Maduro has blamed the health crisis on medicine hoarding. His government says some the country's richest citizens are holding onto large amounts of medicine to create unrest.

A leading group representing drug makers says there are shortages of 85 percent of medicines. Long waits have been reported at pharmacies.

Because of the country's deep economic crisis, many doctors are leaving the country. Patients are having a hard time getting treatment.

The Venezuelan economy was hit hard by the fall in oil prices more than two years ago. The Maduro government has been unable to ease high inflation, shortages of goods and services and growing unrest.

tension –n. a state in which people, groups, countries, etc., disagree with and feel anger toward each other

hoarding –n. to withhold something from being sold

pharmacies –n. a store where drugs and medicines are prepared and stored