Update Required To play the media you will need to either update your browser to a recent version or update your Flash plugin.
By Bruce Alpert
27 September, 2016


Tammy Mondrage lost her job because of cutbacks in America's coal industry.

Mondrage worked as a nurse at a high school in Southwestern Virginia. In June, school board officials cancelled more than 40 positions, including hers, for budgetary reasons.

"The budget cuts came because of the loss of the coal industry," she said.

Tammy Mondrage lives in the community of Steinman, Virginia. Steinman was named for the Steinman Brothers, who operated a coal mine in the area about 100 years ago. Over the years, the coal industry has kept unemployment levels down and helped pay for schools and other government services.

But that is changing.

A year ago, Tammy Mondrage's husband David lost his job with the Paramont Coal Company. Their son, Zachary, also lost his job at Paramont.

"When I was growing up, everybody was a coal miner's kid," said Tammy Mondrage. "That is what this community was. That is what everybody knew. It was big."

The question of what the future should be for the coal industry is an issue in the United States elections.

The Republican Party has nominated businessman Donald Trump as its candidate for president. Trump has said he would cancel rules designed to reduce rising temperatures in Earth's atmosphere. Many of those rules were created during the presidency of Barack Obama. 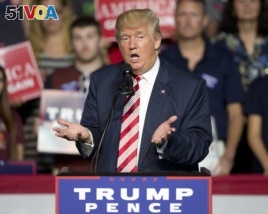 Trump said the coal mines "will be gone if she gets elected."

Clinton is the candidate of the Democratic Party. She has said environmental rules are needed to reduce pollution linked to climate change. But she also wants to help retrain coal workers and make sure they do not lose earnings during their retirement years.

"I firmly believe that if you spent your life keeping the lights on for our country, we can't leave you in the dark," Clinton said.

Some coal towns are trying to make changes to deal with lost coal industry jobs.

Cleveland is a small town in Virginia's coal country. The town had four food stores, banks, a hotel and a train station in the 1950s.

None remain. And all of the town's schools have closed, said Cleveland Mayor David Sutherland.

But Cleveland did not lose its picturesque mountain trails. A river continues to run through the town. Recently, a rental store for rafting and boating opened up near the Town Hall. Sutherland said Cleveland sees a future with tourism.

The nearby town of Haysi has been working to make its buildings nicer looking for tourists. It is replacing old windows and doors and painting the downtown buildings.

Zachary Mondrage, who lost his coal industry job at Paramont Coal Company, is joining the move from coal to tourism. He is studying for a new job in outdoor tourism.

"The reason why I decided to get into this is because I have always been an outdoor enthusiast as far as hunting, fishing and just being outdoors and enjoying it," he said. "And I thought that would be a great career opportunity to get into."

Nadeem Yaqub reported this story for VOANews. Bruce Alpert adapted the story for Learning English. George Grow was the editor.

We want to hear from you. Write to us in the Comments Section and share your views on 51VOA.COM. Do you know people who lost a job in an industry that has cut back employment in recent years?

nurse – n. a person who is trained to care for sick or injured people

enthusiast – n. a person who enjoys something very much

picturesque – adj. very pretty or charming: like a painted picture

rafting – n. the activity of traveling down a river on a raft

tourism – n. the activity of traveling to a place for fun and enjoyment

downtown – adj. of or related to the center of a city