Virus Becomes the Latest Battle between Iran, US

Update Required To play the media you will need to either update your browser to a recent version or update your Flash plugin.
By Susan Shand
15 April 2020


Both Iran and the United States are fighting a common enemy in the coronavirus pandemic. Yet the two sides are continuing actions meant to pressure each other.

At first, Iran appeared to be losing the battle to contain COVID-19, the disease caused by the virus. Now, the Iranian government is seeking to use its struggles with the disease to influence international opinion on U.S. sanctions against Iran.

The government has asked for $5 billion from the International Monetary Fund (IMF). Yet the country continues to break the rules of its 2015 nuclear agreement with world powers. The United States withdrew from the deal in 2018 under President Donald Trump. 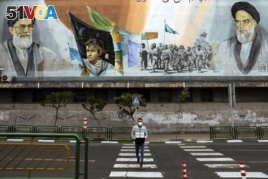 The Trump administration has said that aid can reach Iran, but humanitarian organizations say the U.S. sanctions make that difficult.

At the same time, the U.S. military is now pulling its soldiers out of Iraq. Trump says this troop redeployment was the plan all along. And he adds that Iran plans "a sneak attack" against U.S. forces.

The possibility of war between the countries is not discussed openly as both governments fight the pandemic. Yet it is still a possibility. Some observers say it is just as possible as it was after the drone strike that killed Iranian General Qassem Soleimani in Iraq. The U.S. military carried out the attack in January.

"After Soleimani's killing, everybody thought there will be war, but nothing happened," said Mahsa Rouhi. She is with the International Institute for Strategic Studies. She added that the two nations are back in a situation where any move could easily lead to a conflict.

"Whereas we were so close to war that it's not that nothing happened," Rouhi said. "And we are not back to normal. ... We are back to a situation where any move could easily escalate into a conflict."

Tensions between the two countries can seem unimportant when compared to the pandemic.

During the first few days of the coronavirus outbreak in Iran, Foreign Minister Mohammad Javad Zarif was mostly silent. Now, he is speaking up against the U.S. sanctions, which make it difficult to get some medical supplies. He claims that the United States is using "medical terror" against Iran.

It is also a way to blame the U.S. government for Iran's unwillingness to fight the virus in the early days, leading to many deaths.

Human Rights Watch said American laws as written affect Iran's ability to get important medical equipment. International companies are afraid to sell to Iran because they do not want to be accused of violating the sanctions.

Olivier Vandecasteele is Relief International's country director for Iran. He said in a statement that the sanction rules about medical supplies are unclear and have slowed "the health response in the first weeks of the outbreak."

Both China and Europe have provided aid to Iran, as have the Gulf nations. They are worried the virus could spread beyond Iran's borders to their countries.

Iran says it can make its own protective equipment to fight the coronavirus. U.S. officials say this means that the Iranians do not really need money from the IMF.

The U.S. campaign against Iran seeks to force Iran to stop using its money to interfere with other countries, such as Iraq. U.S. officials fear that if Iran is given IMF money, it will continue to finance military interference in those countries.

The Iranian government believes its actions are defensive.

For now, people continue to die of the virus in Iran, noted Rouhi. She adds the pandemic could spread to U.S. allies in western Asia, forcing the world to still work with Iran's government.

pandemic – n. a contagious illness the affects many countries

sanctions – n.a financial blockade against a nation to make it change its behavior

outbreak – n. the sudden appearance of a contagious illness