Update Required To play the media you will need to either update your browser to a recent version or update your Flash plugin.
By Susan Shand
19 April 2020


As people in Zimbabwe suffer from hunger, police officers carried out a raid as part of new public health measures. They seized and destroyed three tons of fruits and vegetables by setting fire to them.

The police were enforcing measures for fighting the new coronavirus. They were punishing a group of farmers who had violated restrictions on movement by bringing their produce to a busy market.

The farmers returned home with nothing.

Lockdowns to slow the spread of the virus have blocked many farmers from getting food to markets. Such measures are in effect in at least 33 African countries. Restrictions on movement have also threatened food aid that goes to rural populations. Many small, neighborhood markets where millions buy their food are closed.

The United Nations Food and Agriculture Organization reports that nearly 250 million people in Africa did not have enough food before the coronavirus pandemic. That represents about 20 percent of the continent's population. Now, it is worse.

"With lockdowns, border closures... the impact of COVID-19 on Africa could be like nothing we have seen before," said Sean Granville-Ross of the aid group Mercy Corps. COVID-19 is the name of the disease resulting from the virus.

Lockdowns without systems to help the poor "may affect us very, very much," said Lola Castro. She is regional director in southern Africa for the U.N.'s World Food Program (WFP).

In Kenya's capital, Nairobi, the neighborhood of Kalema is desperate. Many people there are hungry and very poor. Last week, thousands of people fought each other for food aid. Some people fell to the ground and were crushed by the crowd.

The World Food Program was already feeding millions in Africa, mainly people in rural areas, because of several disasters. The pandemic has made things worse. 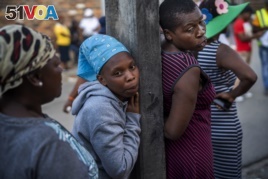 Residents of the Alexandra township in Johannesburg wait for a distribution of food organized by the municipality Wednesday, April 15, 2020 downtown Johannesburg.

In Sudan, U.N. officials say restrictions on movement are stopping aid workers from reaching some of the 9.2 million people in need.

The most severe dry weather in many years is threatening about 45 million people with hunger across southern Africa.

Somalia is struggling to get food to people living in territory controlled by extremists. Two months ago, Somalia's government declared a national emergency after desert insects destroyed thousands of hectares of crops. That left about 20 million people with severe food shortages. Now the insects have returned to the area.

In the Sahel region of West Africa, nearly 30 million people are struggling to find food, said Granville-Ross of Mercy Corps.

On top of these problems, the World Bank said the coronavirus could create "a severe food security crisis in Africa."

Among those at risk are millions of children usually fed through the WFP's school meals program. A few weeks after the virus arrived in Africa, many schools closed. About 65 million children are now missing out on meals, the WFP told The Associated Press.

For many Africans, the virus is not the worry, it is surviving the lockdowns.

"Most Africans work in the informal sector and need to go out every day," said Matshidiso Moeti of the World Health Organization.

The virus has been slow to spread in Africa. It has not yet experienced the large number of cases and deaths reported in parts of Europe, East Asia and the United States.

The WFP said economies of many African countries are at risk. The organization said, "For many poor countries, the economic consequences will be more devastating than the disease itself."

lockdown – n. to shut down an entire country or city

pandemic – n. a contagious illness that crosses from one country to another

impact – n. the way an events affects something or someone

Informal sector – n. working in a part of the economy that is not official

consequence - n. the results of an action