Update Required To play the media you will need to either update your browser to a recent version or update your Flash plugin.
By Jim Dresbach
09 January, 2016


Better jobs, pay and economy are the top issues for voters, a Voice of America informal study revealed.

VOA listened to the questions that voters ask presidential candidates. These are questions voters ask at rallies and meetings. Rallies were recently held in New Hampshire, Iowa, South Carolina and Illinois.

Of all the questions voters asked of candidates, 27 percent were about the economy. 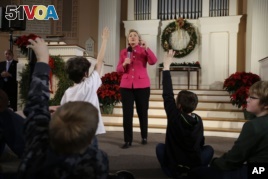 "What plans do you have to create better-paying jobs than minimum wage?" a man asked Democratic candidate Bernie Sanders in Iowa last week.

Health care came in second-most asked, at 15 percent of the questions. Concerns about immigration came in at 12 percent.

Just 10 percent of the questions asked of the candidates were about national security or terrorism. A Gallup poll in December found 16 percent of Americans listed terrorism as their top concern.

VOA observed that Republicans were more likely to ask about terrorism than Democrats.

Sometimes, the issues were connected, or overlapped. New Jersey Governor Chris Christie, who is a Republican and says he wants to be president, was asked about terrorism and gun violence.

"It may score [political] points to mention ISIS and the threats to America, but more people have been killed in America by homegrown extremists than by international terrorists," a man said to Christie. "When do we consider gun violence a credible threat to our safety and security?"

Candidates were often asked about the Second Amendment. That amendment states that "A well-regulated Militia, being necessary to the security of a free State, the right of the people to keep and bear Arms, shall not be infringed."

Many Americans interpret, or define it, different ways. That has led to conflict about gun use in America. More people were killed in America in the past 10 years by guns (280,000) than by terrorism (24), according to numerous news sources and confirmed by PolitiFact.

PolitiFact "is a fact-checking website that rates the accuracy of claims by elected officials and others who speak up in American politics." It is staffed by editors and reporters at the Tampa Bay Times.

Democratic contenders were often asked to assist in solving problems aligned with their party. For example, Hillary Clinton repeatedly hears questions on healthcare insurance and the economy.

Republican candidates were more likely to be asked about welfare abuse and immigration.

Republican candidate Donald Trump was not part of the VOA study. He does not field questions from audiences at his campaign events.

This Article was written by Michael Bowman for VOAnews. Jim Dresbach adapted it for Learning English. Kathleen Struck was the editor.

What do you think is the biggest problem facing America? We want to hear from you. Write to us in the Comments Section or visit our 51VOA.COM.

aligned – v. in line with, of interest to