Volcanic Activity on Spanish Island Keeps Many Away from Homes

Update Required To play the media you will need to either update your browser to a recent version or update your Flash plugin.
By Ashley Thompson
19 October 2021


It has been one month since the Cumbre Vieja volcano began bursting on the Spanish island of La Palma. The eruption forced Culberta Cruz, her husband and their dog from their home. Today, they are living in a small vehicle as they wait to be able to safely return home. They see no end of their situation in sight.

Cruz and her husband, banana grower Tono Gonzalez, must remove volcanic ash from their vehicle each day. The volcano continues to burst.

"One day it's exploding there, the other a vent opens here," Cruz said. "It's just anguish and living in fear, waiting and praying for it to stop erupting. And it's a lot of sadness for those who lost their homes," she added. 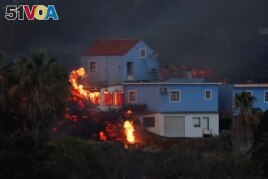 Lava from the Cumbre Vieja volcano burns a house on the Canary Island of La Palma, as seen from Tajuya, Spain, October 19, 2021. (REUTERS/Susana Vera)

Red-hot lava, or liquid rock, has covered almost 800 hectares of land. The lava has destroyed about 2,000 buildings and many banana-growing areas. The volcano started erupting on September 19. More than 6,000 people on La Palma have had to leave their homes. The island is one of Spain's Canary Islands. The island group sits off the coast of northeastern Africa.

After being ordered to evacuate, Cruz and Gonzalez first stayed at a family member's farm. They later took their vehicle to a parking area. There, they could get fresh water and a bit of electricity. They are now looking into a temporary place to live that permits animals.

"We don't know when it's going to stop, that's the problem," Gonzalez said. "This is nature and we have to deal with it, it's bigger than us."

The Reuters news agency reported this story. Ashley Thompson adapted it for VOA Learning English. Susan Shand was the editor.

eruption - n. the action of sending out rocks, ash, lava, etc., in a sudden explosion

vent -n. an opening through which air, steam, smoke, liquid, etc., can go into or out of a room, machine, or container

evacuate - v. to remove (someone) from a dangerous place