The Beetle has been one of America's most recognizable vehicles for nearly 70 years.

The first Beetle was introduced in Germany in 1938 when the Nazi party controlled the country. The vehicle was first developed by Ferdinand Porsche.

The company began as a state-operated company called Volkswagenwerk, or "The People's Car Company," under the control of Nazi leaders including Adolf Hitler. After World War II, the allied nations decided to support Volkswagen to help restart Germany's automobile industry. 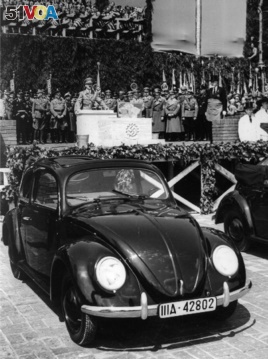 Nazi leader Adolf Hitler speaks prior to laying the cornerstone for a giant automobile factory in Fallersleben near Hanover, Germany, May 26, 1938. In the foreground is a Beetle car. (AP Photo)

The Beetle came to the U.S. in 1949, where it became known as a simple car with a very unusual look. Unlike most vehicles, its engine was in the back of the car.

During the 1960s, it was especially popular with America's hippies. The Beetle also was popular with members of the baby boom generation who were born and grew up after World War II.

The Beetle sold in the U.S. for about 30 years before the company halted sales in America in 1979. The company continued production of the model in Mexico and Latin America.

But the car made its return to the American market in 1998 in an attempt to increase Volkswagen sales. This time, the car was launched as the "New Beetle." This model kept the same basic shape, but had a more modern look and came with the latest technology.

The vehicles were available in new, brighter colors and the designers created playful elements, such as a flower holder in the front seat.

This new design appealed mainly to female buyers. Volkswagen redesigned the Beetle for the 2012 model year in an effort to make it appeal more to men. This model had a flatter top, less rounded body and increased storage space.

The end of the Beetle comes at a turning point for Volkswagen. The automaker was hurt in recent years by a scandal in which it was forced to admit some of its cars were equipped with devices that cheated on diesel emissions tests.

Volkswagen is now preparing to launch a series of electric vehicles to appeal more to a new generation of environmentally-concerned buyers.

Hinrich Woebcken is President and CEO of Volkswagen Group of America. In a statement, he said the loss of the Beetle will likely produce a lot of different emotions for the vehicle's many fans.

He announced that to celebrate the Beetle's rich history, the company is launching two final models of the car in 2019. These final Beetles will get several new features inside and out.

The Volkswagen chief said as the company moves forward, there are "no immediate plans to replace" the Beetle.

However, Woebcken noted that the company did announce last year it was bringing back a new version of its popular Volkswagen Bus. That new vehicle, the electric I.D. Buzz, is expected to go on sale in 2022 in the U.S., Europe and China.

Because of that decision, he said it is best to "never say never" about the Beetle.

Bryan Lynn wrote this story for VOA Learning English based on reports from the Associated Press, Reuters and Agence France-Presse. Mario Ritter was the editor.

We want to hear from you. Do you have any memories about the Volkswagen Beetle? Write to us in the Comments section, and visit 51VOA.COM.

hippie – n. usually a young person from the 1960s and 70s who rejects established social customs