Update Required To play the media you will need to either update your browser to a recent version or update your Flash plugin.
By Bryan Lynn
20 December 2022


A volunteer organization in Ukraine is producing much-needed clothes for women soldiers fighting in the country's war against Russia.

The group, called Zemliachky, is now serving many of the 57,000 women serving in Ukraine's military. It provides things like uniforms, boots, underwear and personal care materials.

The nonprofit group was co-founded by Kseniia Drahaniuk. She is related to 25-year-old female soldier Anastasia Mokhina. Mokhina volunteered along with her husband to fight against Russia to help defend Ukraine. After joining the war effort, however, Mokhina learned that Ukraine's military was not well prepared to supply clothes and equipment to female soldiers. 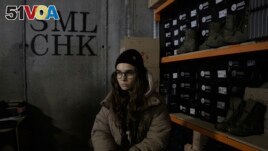 Co-founder Kseniia Drahaniuk of the nonprofit group Zemliachky pauses during an interview in front of shelves stacked with military boots at its supply room in Kyiv, Ukraine, on Tuesday, Dec. 6, 2022. (AP Photo/Vasilisa Stepanenko)

This led Drahaniuk to start collecting necessary materials to send to Mokhina. Drahaniuk later decided to create a homegrown supply operation for other women soldiers.

"Our army was not prepared for the fact that so many women would appear in the army," said Drahaniuk.

Today, at least 6,000 Ukrainian women have been deployed on or near the front lines in the war against Russia. Some serve in positions such as medics or intelligence officers. Others take part in more traditional fighting activities.

They have joined the fight in a country where nearly all men aged 18 to 60 have been banned from leaving Ukraine under martial law enacted after Russia's invasion.

When Drahaniuk's group got started, it outsourced the manufacturing of uniforms for women. But it has since designed and produced them from its own factory in the northeastern city of Kharkiv.

The organization has helped give out more than $1 million worth of military support. About one-fifth of the money comes from direct donations. The rest is provided in goods or services. Corporate donors include medical supply companies, beauty centers and companies in the gaming industry, Drahaniuk said.

Mokhina has worked as a signals and communications specialist and with territorial defense troops in Kyiv.

"We just wanted to fight back," Mokhina said. "So my father and I said, ‘We will go' — and went straight to the nearby army post."

Numerous orders come in and go out by truck, train and other transportation services daily. The group established a space in northeastern Kyiv where women on leave can come to pick up what they need. All materials are provided at no cost.

"Ksyusha gave us everything we wear. ... She is our savior," said Maria Stalynska. She joined the military in August and has been fighting on front lines. Ksyusha is another name some people use for Drahaniuk. "There are even cases when we need medicine or a hospital. We immediately go to Ksyusha," Stalynska added.

Drahaniuk said she once got a call saying that an order of 10 uniforms and pairs of shoes needed to be reduced to five – after a Russian attack took five women's lives.

"They really give their lives for the freedom of our country," Drahaniuk said.

martial law – n. the control of a country by its military instead of elected leaders

outsource – v. to pay for goods or services from an outside or foreign supplier