Voters in Just a Few States Will Decide US Presidential Election

Update Required To play the media you will need to either update your browser to a recent version or update your Flash plugin.
By Christopher Jones-Cruise
18 September, 2016


On November 8 this year, Americans across the country will vote for president. But the candidate who wins the most votes will not necessarily be the winner.

Instead, the U.S. has a complicated system called the Electoral College. In that system, each of the 50 states and the District of Columbia casts votes for the president.

Under the Electoral College, not every state is equally important. In the 2016 election – as in past elections – only a few states will really matter. 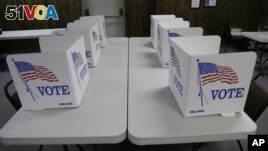 Not the biggest states. Not the most heavily populated states. The swing states.

In the last four elections, eighty percent of U.S. states selected the presidential candidate from the same political party every time.

As a result, the candidates do not usually spend much time or money campaigning in those "safe states." Instead, they focus on the swing states, where no one knows which candidate is likely to win.

None is more important than Ohio. That state has voted for every winning presidential candidate since 1964.

Of course, most voters will mark ballots in safe states, not swing states. And because all but two states follow a winner-takes-all rule, most states go to the candidate whom the majority of voters choose.

So, a voter in Minnesota could mark a ballot for Republican Donald Trump. But, most other Minnesota voters will probably choose Democrat Hillary Clinton. As a result, all of Minnesota's 10 electoral votes will go to Clinton, and the Republican voter's ballot will not really do anything to help Trump.

However, the voter's other choices may affect candidates for state and local offices. So it is important that people in safe states vote, too.

Are the Democrats one swing state away from winning?

The Washington Post newspaper notes that "the Democratic nominee begins at a significant advantage over the Republican one." It says the Democrats have the advantage no matter who the party's candidate is.

Consider the numbers. A candidate needs 270 out of 538 Electoral College votes to become president.

In the last six presidential elections, the Democratic candidate has won the same 19 states plus Washington, DC each time. Those areas together carry 242 Electoral College votes.

If Democrat Hillary Clinton can win those areas this year, plus the swing state of Florida, she will earn 271 Electoral College votes –one more than she needs to win the presidency.

Republican Donald Trump has a harder path to victory. Thirteen states voted for the Republican candidate in each of the last six presidential elections. But many of them are small states. They have a total of only 102 electoral votes.

As a result, Donald Trump must not only win those 13 states. He must also win several swing states – or even some traditionally Democratic states – to reach the 270 electoral votes he needs to win.

Will Donald Trump change the map this year?

Some Republicans are worried that Trump's path to victory may be even harder than that. The website TheWeek.com noted that Trump may do worse than lose the swing states this year. He may also lose some of the states that Republicans have historically won.

The Washington Post newspaper reports that some political experts are preparing to blame Donald Trump if the Republicans fail to win the presidency. But Post writer Chris Cillizza says the Republican Party has a problem that "goes deeper than Trump -- or any one candidate."

Cillizza says the real reason may be that the Republican Party has not been able to convince the increasing number of nonwhites in the U.S. to vote for its presidential candidates. He writes: "What has become increasingly clear is that any state with a large or growing nonwhite population has become more and more difficult for Republicans to win."

VOA Correspondent Christopher Jones-Cruise reported this story from Washington and wrote it in Learning English. Kelly Jean Kelly was the editor.

consistently – adv. always acting or behaving in the same way