Update Required To play the media you will need to either update your browser to a recent version or update your Flash plugin.
By Bryan Lynn
03 August 2022


A team of doctors has used virtual reality technology to prepare for an operation that successfully separated twins joined at the head.

Virtual reality, or VR, is a computer environment designed to simulate real-life conditions and objects. People can use headsets or other electronic equipment to experience VR environments.

VR technology was used by doctors in Brazil and Britain who were involved in the operation, or surgery, involving the joined twins. 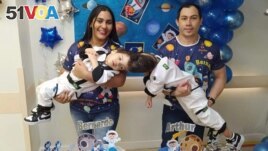 The twin boys are named Arthur and Bernardo. They were born in a rural part of northern Brazil in 2018. The two were joined at the head and shared some brain tissue.

Doctors in Brazil had attempted to separate the boys in the past, but they were unsuccessful. Medical experts had advised the parents that performing further surgery would be too risky.

But the hospital that cared for the twins for the past two-and-a-half years decided to contact a British charity that has financed and provided medical teams to support similar separations.

The charity is called Gemini Untwined. Its creator and director is Noor ul Owase Jeelani. He is a surgeon at London's Great Ormond Street Hospital for Children. Jeelani specializes in separating joined twins, especially those linked at the head.

Gemini Untwined has helped carry out several successful surgeries of child twins since it was established in 2018. But Jeelani said the separation of Arthur and Bernardo was the most difficult operation yet.

He explained in a statement that this is because the boys shared important veins in the brain. At four years old, the twins were also the oldest with connected brain tissue to try separation surgery, Jeelani added.

The process to separate the twins – carried out at Rio's Paulo Niemeyer State Brain Institute – was long and intense. Jeelani said a total of seven surgeries, involving more than 100 medical workers, were required. The final two operations in June lasted about 33 hours. He said the surgeries were completely successful.

Jeelani said a major reason for the successful separation was the VR training the medical teams from Britain and Brazil received in the months leading up to the real-life operations.

The teams used brain scans of the boys to create a digital map of their shared heads and brain tissue. Using this data, doctors performed several trial operations with the use of VR equipment. The simulated surgeries permitted the teams to try out different methods that were used in the actual operations.

VR technology is currently used in a number of ways in the medical field, including past separation surgeries involving twins. But Jeelani said it was the first time the technology has been used for this purpose in Brazil.

Speaking to Britain's PA Media news agency, Jeelani said, "It's just wonderful, it's really great to see the anatomy and do the surgery before you actually put the children at any risk."

He added that VR training before this kind of operation is "reassuring" for the surgeons involved. "In some ways these operations are considered the hardest of our time," Jeelani added. "And to do it in virtual reality was just really man-on-Mars stuff," meaning the technology was something really unusual and complex.

The boys' mother, Adriely Lima, expressed the family's relief and happiness as they look forward to finally bringing the twins home. "We've been living in the hospital for nearly four years," she said. Lima added, "Our heart is full of gratitude."

Bryan Lynn wrote this story for VOA Learning English, based on reports from Agence France-Presse, PA Media and Gemini Untwined.

twins – n. two babies born at the same time to the same mother

simulate – v. to do or make something that looks real, but is not

vein – n. one of the tubes in the body that carries blood to the heart

scan – v. to use a special machine to read or copy images into a computer

anatomy – n. the scientific study of the body and how its parts are arranged

reassure – v. say something to stop someone from worrying