'Waiting in the Wings' on Broadway

Update Required To play the media you will need to either update your browser to a recent version or update your Flash plugin.
By Anna Matteo
13 October, 2018

On this show, we talk about expressions in American English and often explore their meanings in depth.

And today, we visit the exciting world of live theater!

Give my regards to Broadway. Remember me to Harold Square. Tell all the folks on 42nd Street that I will soon be there!

The world of Broadway and live theater have given us many expressions. And several come from part of the stage -- the place where plays, musicals and other stage shows are performed.

For example, in a theater, the wings are the hidden areas to the left and right of the stage. This is where actors wait before they make an appearance. So, an actor waiting in the wings is standing off-stage, waiting to perform. 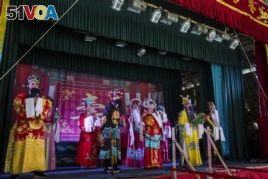 The wings are to the right and left of the stage. The audience can't see performers waiting in the wings. Here, Chiu Chow Opera performers sing on stage as part of the Hungry Ghost Festival in Hong Kong.

But the expression "waiting in the wings" is not just used in the world of theater. It can also mean someone is ready to enter a situation, be brought to public attention or take a job or position.

For example, you can use it in a business setting.

Let's say the head of a company is nearing the end of her career. She has been training her assistant to take her place when she retires. So, you could say her assistant is waiting in the wings to take control of the business.

Now, let's go back to the stage. People other than actors can stand in the wings of a theater.

Often actors on stage forget their lines. So, it is a good idea to have someone else standing in the wings holding a script. He or she could say the forgotten lines to the actor without the audience hearing or seeing them.

Actors who forget many of their lines may not have prepared very well. And that is where we get the expression to wing it. When you "wing it," you do something or try to do something without much preparation.

There are other expressions that mean about the same as "winging it." If I say something off the cuff or off the top of my head, I say it without thinking.

Now, no expression in the theater world is more iconic than: "The show must go on."

It's clear that every one of you is in perfect physical condition,

So, the show must go on!

Because as old as time itself, there's a grand theatrical tradition that the show must go on! Fans in costumes go to the opening of the movie "Ant-Man and the Wasp" in Los Angeles, California, U.S., 2018.

This saying means that no matter what happens – even if all the performers' costumes get lost at the cleaners or the lead actor gets food poisoning – the show will be performed.

This represents the heart of theater people. They will do whatever it takes to put the show on. It also means that no one is more important than the show. If something should happen to an actor, someone must be ready and able to take their place. That is why actors in live theater performances have standbys. Also called understudies, these people do not perform every day, but they are ready to step into one or more parts should they be needed.

So there are actors who are on standby, waiting in the wings for their turn. But we can all find ourselves on standby. A standby is anyone who is ready to step in when needed, especially in an emergency. For example, if a hospital is expecting to treat many wounded people, they may have many doctors, nurses and ambulances on standby.

Besides emergencies, we also commonly use this word in airline travel. A person on standby is on a waiting list. They wait for an available unreserved seat on the airplane. Used as an adjective, there are standby passengers and standby tickets.

"Standby" as a verb means to be waiting but ready to act. But keep in mind, that this sounds very official. We probably would not tell our family and friends to "stand by," unless it was an emergency or as part of an important event.

We should mention another important way we use "stand by." When we stand by people we give them the support they need to get through a difficult time. It is important to stand by your families and friends.

And that's Word and Their Stories. I'm Anna Matteo.

Just as long as you stand, stand by me

Anna Matteo wrote this story for Learning English. George Grow was the editor. The songs in order of appearance are: Judy Garland singing "Give My Regards to Broadway," cast members of the musical Curtains singing "Show People" and Ben E. King sings "Stand By Me" at the end.

setting – n. the time, place, and circumstances in which something occurs or develops : the time and place of the action of a literary, dramatic, or cinematic work : the scenery used in a theatrical or film production

script – n. the written text of a stage play, screenplay, or broadcast specifically : the one used in production or performance

audience – n. a group of listeners or spectators

standby – n. one to be relied on especially in emergencies : a favorite or reliable choice or resource

understudy – n. to study another actor's part in order to substitute in an emergency