Update Required To play the media you will need to either update your browser to a recent version or update your Flash plugin.
By Dan Friedell
09 August 2021


No one knows why 14 Asian elephants left a protected nature area in China and started walking north about a year ago.

But after covering 500 kilometers, the elephants seem to be heading home.

The elephants are protected in China. There are only about 300 in the country.

During the year that the elephants walked, they became famous in China and around the world. They ate crops on farms. They entered buildings to find food. 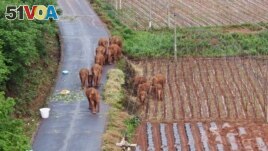 The animals made it close to Kunming, a large city in Yunnan province, before turning around.

One adult male separated from the group. He was captured and taken back to the protected nature reserve.

By the end of the day Sunday, the elephants were still about 200 kilometers from the reserve.

People who have been watching and keeping the elephants safe helped them avoid traffic. They used food to guide them toward a bridge where they could cross the Yuanjiang river.

A statement sent from the National Forestry and Grassland Administration said now that the elephants have crossed the river, they are in a safer habitat and making progress toward home.

Dan Friedell adapted this story for Learning English based on an Associated Press report. Ashley Thompson was the editor.

What would you do to help the elephants get home safely? Tell us in the Comments Section and visit 51VOA.COM.

drone –n. a type of small aircraft that flies without a pilot

province –n. any one of the large parts that some countries are divided into

reserve –n. an area of land where animals and plants are given special protection