War in Ukraine among Reasons for High Cooking Oil Prices

Update Required To play the media you will need to either update your browser to a recent version or update your Flash plugin.
By Dan Friedell
28 April 2022


Vegetable cooking oil prices rose around the world during the two years of the COVID-19 health crisis. Prices went even higher two months ago when Russia started a war with Ukraine.

The two countries supply much of the world's sunflower oil. About half comes from Ukraine and 25 percent comes from Russia.

The price increases are hurting people around the world who use oil to cook their food. 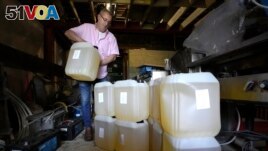 Harry Niazi carries a container of sunflower oil out of storage at Olleys Fish Experience in London, England April 21, 2022. Cooking oil prices have been rising since the pandemic began and Russia's war in Ukraine has sent costs spiraling. (AP Photo/Kirsty Wigglesworth)

Food stores in Turkey are limiting the amount of oil families can purchase.

In Istanbul, Mahsun Aktas is a food server and cook at a restaurant that sells seafood like fish, squid and mussels. He said the restaurant finally raised prices in April because oil became four times more costly than it was in 2019.

He said the restaurant postponed raising prices for many years, hoping oil costs would fall.

"But we saw there is no improvement," he said. But higher prices cause a problem: "the customer cannot afford it."

Indonesia said it will soon stop exporting cooking oil. That means the international price of palm oil will rise again. The high cost of cooking oil is one reason for recent protests in the capital, Jakarta.

A woman named Emiwati runs a small eating place in Jakarta. She needs 24 liters of oil each day to make her traditional beef and rice meal. She has been having trouble buying the oil she needs. She said she is not raising prices because she does not want to lose customers. But she is losing money. "I am sad," Emiwati said.

Glaudina Nyoni is from Harare, Zimbabwe. She was shopping at a food store and told a reporter that the cost of oil has gone up 100 percent over the last two months.

"We will just have to boil everything now, the days of the frying pan are gone," she said.

In Britain, Spain and Italy, stores have also limited the amount of oil customers can buy.

In Kenya, the nation's main power company warned people about buying cooking oil on the street. The company said thieves were stealing liquid from power stations and selling it as cooking oil. If people use it, the company said, they will become sick.

Yawar Khan owns an Indian restaurant in London. Khan said 20 liters of oil once cost $28. Now it is $49. But Khan said passing the higher cost on to customers will cause a "catastrophe."

International companies like Unilever and Cargill are warning that prices for products that use oil, such as soap and mayonnaise, will go up. Other companies are trying to come up with new combinations so they can use less or different oils for their products.

Food experts say there is a chance that prices will go down later in the year when farmers in the northern half of the world harvest their crops. But there is no guarantee, said Joseph Glauber of the International Food Policy Research Institute.

Steve Mathews studies agriculture at Gro Intelligence, a research company. He said if Russia and Ukraine reached an agreement to stop the war, there might be a short-term decline in prices.

In the long term, Glauber said, the shortage might cause countries to change the amount of vegetable oils required to be mixed with fuel as a way to reduce pollution. In the U.S., for example, 42 percent of the soybean oil gets mixed into fuel. In Europe, the European Commission said it would support countries that decide to reduce the amount of vegetable oil that is used to make fuel for vehicles.

Currently, however, restaurant owners from London to the southern U.S. state of Tennessee are worried that they might go out of business.

"You hate to raise prices on people, but it's just that costs are so much higher than they were a couple of years ago," she said.

customer – n. a person or group that buys a good or service

mayonnaise – n. a food product added to other foods like salads or sandwiches made from eggs and vegetable oil