War in Yemen: The Players and the Goals

Update Required To play the media you will need to either update your browser to a recent version or update your Flash plugin.
By George Grow
16 April, 2015


Have you been following what is happening in Yemen? Are you wondering exacting who is fighting who and for what?

Some Yemenis living overseas say they are not sure what is happening back at home.

This man, a high school teacher, spoke to VOA at a Yemeni restaurant in Cairo, Egypt. He says returning to Yemen would be dangerous. Yet he adds that not knowing what is happening to his family and his country is far more difficult.

He says the conflict is mainly between the Houthis and Yemen's internationally-recognized government. But he says everyone knows the situation is more complex than that. 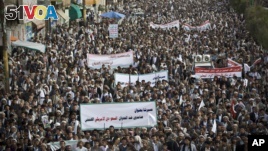 The Iranian government has denied providing military support to the Houthi fighters in Yemen. Peter Jenkins is a former British ambassador to the International Atomic Energy Agency. He says the Houthis are not exactly agents of Iran.

"I think it's wrong to think of the Houthis as proxies for the Iranians. I think it's more that there is a mutual sympathy that rests in part on the Shi'ite brand of Islam, but they're not proxies so they can't be controlled by Iran."

Saudi Arabia, however, is openly fighting the Houthis with airstrikes. A number of countries are supporting the raids. They include the United Arab Emirates, Kuwait, Qatar, Bahrain, Morocco, Egypt, Sudan and even the United States.

Activist Summer Nasser says this show of force is meant to hurt the Houthi forces, but it is also hurting the Yemeni people. She spoke to VOA from her home in southern Yemen.

"Air bombardments by 10 countries are too much for this small, impoverished society. But if Houthis do dialog, I don't even think Saudi Arabia will take it seriously because Saudi Arabia wants to destroy Houthis as much as they can before any kind of settlement."

The Houthis are, and have long been, in firm control of territory in Yemen's north, near the Saudi border. Since their offensive began last year, the Houthis have taken the capital, Sana'a, and many of the towns and cities along the country's main road and the road from Sana'a to the port of Aden.

In southern Yemen, the battle lines become more unclear because the Houthis often are not even really Houthis. Ousted President Ali Abdullah Saleh is now allied with the group. While still in power, his government fought with the Houthis for six years.

Others soldiers are not fighting at all, leaving the Yemeni people and tribesmen to fight off the Houthis' allies. And the unrest continues.

The Houthis are a militia of Zaidi Shias, a group in power for 1,000 years before the 1960s. At that time, a republican army seized power in Yemen. Today, the Houthis remain a large minority in the mostly-Sunni Muslim country.

The United Nations says nearly 600 people have been killed the since airstrikes began, and hundreds have fled the country. As the violence continues, Yemeni people are increasingly on neither side. They only want the war to stop.

This report was based on a story from VOA's Heather Murdock in Cairo. George Grow wrote it for Learning English. Kelly Jean Kelly was the editor.

home – n. the place where one was born or comes from

complex – adj. having many parts that are difficult to understand; not simple

support – n. holding up or in position; agreement with others to help them reach a goal

sympathy – n. sharing feelings or emotions with another person, usually feelings of sadness