UAE: War in Yemen 'Practically' Over


The United Arab Emirates (UAE) says its troops are ending their involvement in the war in Yemen.

The UAE is a major ally of Saudi Arabia and part of the Saudi-led coalition force in Yemen. The coalition has been fighting Iran-supported rebels for over a year.

An Arabic language version of the UAE statement said the war in Yemen is only "practically" over. 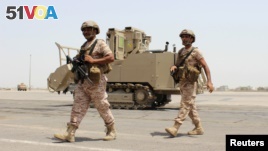 FILE - Soldiers from the United Arab Emirates walk past a military vehicle at the airport of Yemen's southern port city of Aden, Aug. 12, 2015.

The statement read: "Our standpoint today is clear: war is over for our troops; we're monitoring political arrangements, empowering Yemenis in liberated areas."

Coalition forces and forces loyal to Yemeni President Abdu Rabu Mansour Hadi have pushed Houthi rebels out of Yemen's southern cities. The rebels still control most of the northern and central highlands and the Red Sea coast.

The Saudi-led coalition is made up mainly of troops from Gulf nations. They had been launching airstrikes against the rebels since March of 2015. The United States has been providing support to the coalition.

This story was published on VOANews.com. Jim Dresbach adapted it for Learning English. George Grow was the editor.

standpoint – n. a way in which something is thought about or considered

empower – v. to give power to someone