Update Required To play the media you will need to either update your browser to a recent version or update your Flash plugin.
By VOA
09 June, 2016

Most movie industry experts do not expect the film version of the multiplayer video game "World of Warcraft" to be a big hit in the United States. But "Warcraft" is already breaking records in China.

The movie opened there on June 8. It reportedly earned more than $45 million in its first day, the biggest opening day for the Chinese movie market this year.

By comparison, the latest "Star Wars" film, "The Force Awakens," earned $33 million in China on its opening day. 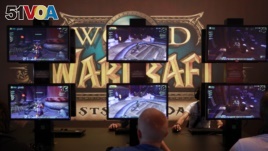 Film critics have not been kind to the "Warcraft" movie. One critic for the New York Daily News wrote, "Somebody should have put this script to the sword."

But criticism has not hurt the film's performance in China, the world's fast-growing movie market.

One reason is the popularity of the fantasy video game in China. Although World of Warcraft reported its lowest number of players in 10 years in 2015, one-third of the game's subscribers were in China, Forbes said. The country even has a World of Warcraft theme park.

"Warcraft" was released by Universal Pictures and Legendary Pictures, which was recently bought by China's Dalian Wanda Group. The deal was announced in January. The Wall Street Journal reported then that it marked the largest deal by a Chinese company in American film production.

"Warcraft" was shown on almost 70 percent of all movie screens in the country. That is China's widest film release ever, according to Deadline.com.

"Warcraft" opens in U.S. theaters on June 10. Observers expect it to earn about $25 million on its opening weekend. That is well below the film's single-day earnings in China.

multiplayer -- adj. related to a computer game designed for or involving several players

sword -- n. a weapon with a long metal blade that has a sharp point and edge

fantasy -- adj. a book, movie, game, etc., that tells a story about things that happen in an imaginary world

subscribers -- n. people who pay to join a service, group or club

theme park -- n. a park with games, rides and entertainment based on one idea, like Disney World

screen -- n. a large, flat, white surface on which images or movies are shown