Update Required To play the media you will need to either update your browser to a recent version or update your Flash plugin.
By VOA
10 May 2022


A famous painting of Marilyn Monroe by American artist Andy Warhol sold for $195 million on Monday. That is the most ever paid in a public sale for a work by an American.

The sale took place at Christie's auction house in New York. Representatives from Christie's said the painting became the costliest work of art from the 20th century ever auctioned. 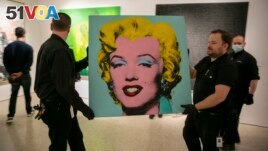 The Warhol painting passed the earlier record holder, Jean-Michel Basquiat. His 1982 painting "Untitled" of a skull-like face sold for a record $110.5 million in 2017 at Sotheby's in New York.

Warhol created more than one image of Monroe. The "Shot Sage Blue Marilyn" painting has been shown in museums around the world.

Christie's said an unnamed buyer made the purchase Monday night. When the auction was announced earlier this year, Christie's estimated it could go for as much as $200 million.

"It's an amazing price," said Alex Rotter, chairman of Christie's 20th and 21st century art department. "Let it sink in, it's quite something."

The earnings of the sale will go to the Thomas and Doris Ammann Foundation Zurich, which put the painting up for auction. The foundation aims to help children with health care and educational programs.

eye shadow –n. a kind of makeup worn on the eyelids

background –n. the part of a scene or picture that is farthest from the viewer

skull –n. the bones that form the head