Update Required To play the media you will need to either update your browser to a recent version or update your Flash plugin.
By Hai Do
03 October, 2019


Americans are talking about a white police officer who killed an unarmed black neighbor in Dallas, Texas. At the time of the shooting, the man was eating ice cream in his living room.

The officer, Amber Guyger, said she mistook her neighbor's home for her own and thought he was a robber. Dallas police arrested Guyger after the shooting death of Botham Jean. She was later dismissed from the police force. 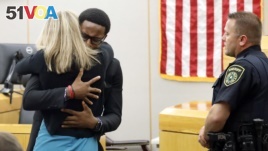 On Tuesday, a Texas court found Guyger guilty of murder. Government lawyers asked for a jail sentence of 28 years, which is how old Jean was. The jury could have sentenced her to up to life in prison, but gave her a 10-year sentence.

The jury's decision was announced on Wednesday. Outside the courtroom, many people reacted angrily. They shouted "no justice, no peace." They thought her sentence was not long enough for the murder.

Inside the courtroom, Brandt Jean, the dead man's brother, stepped up to the witness stand. It was a chance for the 18-year-old to speak to the woman who killed his brother. What came next surprised everyone.

Brandt Jean told Guyger, "If you truly are sorry, I know I can speak for myself, I forgive you."

Brandt Jean added that his brother would have wanted the police officer to turn her life over to Jesus Christ and ask for forgiveness. He then asked the judge, "I don't know if this is possible, but can I give her a hug? Please?"

The judge said he could. And Jean and Guyger put their arms around each other. They spoke softly to each other and hugged again and again. Both were crying and others in the courtroom were also crying.

Dallas County District Attorney John Creuzot is a former trial judge. He told reporters that it was "an amazing act of healing and forgiveness that is rare in today's society ... especially for many of our leaders."

Dallas Mayor Eric Johnson released a statement. It said he would "never, ever forget the incredible examples of love, faith and strength personified by Botham, Brandt and the entire Jean family."

At a place where the Jean family went for religious services, people cheered and cried "amens" when they were shown the video from the courtroom.

The shooting death of Botham Jean in September 2018 was national news. It came after a series of shootings of unarmed black men by white police officers.

Also, it was a strange situation.

Guyger mistook Jean's apartment home for her own when she returned after a long day at work. Finding the door opened, she entered and shot Jean who was eating ice cream, thinking he was a robber. She then called 911, an emergency number, for help and said the words "I thought it was my apartment" nearly 20 times.

Bertram Jean, the father of Botham Jean, told the jury how his son's death changed their lives. He said his son would call home every Sunday after church. Now, he said, his Sundays "have been destroyed."

His wife, Allison Jean, added, if Guyger "was trained not to shoot in the heart, my son would be alive today. He was no threat to her. He had no reason to be a threat to her, because he was in his own apartment."

Wednesday night, as Brandt Jean forgave the officer for killing his brother, Bertram Jean smiled and gave his son a thumbs-up. And his mother Allison Jean was in tears, watching her son walking out of the courtroom.

Hai Do adapted this story for VOA Learning English based on The Dallas Morning News and Associated Press news reports. George Grow was the editor.

hug - v. to put your arms around someone especially as a way of showing love or friendship

district attorney - n. a government lawyer who is responsible for starting legal cases against people accused of crimes

amen - n. used at the end of a prayer or to express approval