Update Required To play the media you will need to either update your browser to a recent version or update your Flash plugin.
By VOA
23 January, 2015

Two recent economic reports warn that, although the world economy is growing, complicating issues like lower oil prices and conflict could hurt progress. 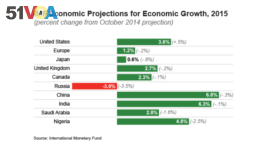 The International Monetary Fund, or IMF, has reduced its prediction for world economic growth from 3.8 to 3.5 percent. That is still an improvement over 2014. But, the international lender says some major economies are facing economic struggles.

The price of oil is about half of what it was last June. The IMF's chief economist, Olivier Blanchard, says lower oil prices have helped many major economies, but investment has dropped in oil exporting countries.

"On the one hand, major economies are benefiting from the decline in the price of oil," Blanchard says. "But on the other, in many parts of the world, lower long run prospects adversely affect demand." 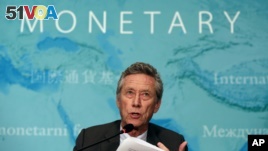 The United Nations also released a report called "World Economic Situation and Prospects 2015." UN economists predict growth this year will be 3.1 percent. They point out that crises like the Ebola outbreak in West Africa and conflict in Ukraine could hurt a world economy showing signs of improvement.

Many see cost-cutting as a barrier to growth. High debt levels have limited opportunities for expansion in Europe. Alfredo Calcagno is an economist with the U.N. Conference on Trade and Development. He says austerity programs suppress economic recovery. Greece, he said, is one example.

The report predicts Africa's growth rate will increase reaching 4.6 percent in 2015 and 4.9 percent in 2016. East-African countries such as Ethiopia, Kenya and Uganda are doing well.

"In these countries, what you have is investment in other areas like telecommunication, infrastructure. You have a rising middle class that also is increasing its demands."

But in Africa south of the Sahara Desert, IMF economists say growth expectations have weakened especially in Nigeria and South Africa. Falling prices of raw materials called commodities have also weakened expectations in Latin American and the Caribbean area.

Exchange rates can also influence economic growth. The value of the US dollar has strengthened while the euro and the yen have weakened. And that is not a bad thing for slowing European and Japanese economies says the IMF's Olivier Blanchard.

"The depreciation of the euro and yen will give a much needed boost to demand in those two parts of the world, which very much need an increase in demand."

The U.S. also is expected to show good growth of over three percent this year.

austerity-n. a situation in which there is not much money and it is spent only on things that are necessary

boost-v. to lift, to push up

How is the economy where you live? Let us know in the comment section or email us at LearningEnglish.51voa.com.