Was Jordan Shooting a Terror Attack?

Update Required To play the media you will need to either update your browser to a recent version or update your Flash plugin.
By VOA
10 November, 2015

The shooter killed two Jordanians, two Americans and a South African. Police then shot and killed the gunman. He was identified as 28-year-old police Captain Anwar Abu Zeid.

The shootings happened on the 10th anniversary of the deadly hotel bombings in Amman, the capital, reported the Washington Post. 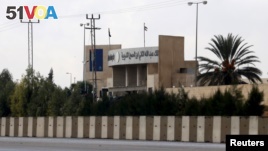 Two other Americans were wounded in the attack. The four U.S. citizens attacked were trainers at the Jordan International Police Training Center near Amman. They worked for DynCorp. It is a U.S.-based security company.

The training center is used to train police cadets from the Middle East, the State Department said. Palestinian security forces train there, as well as police officer candidates for duty in Iraq. It opened in 2003.

The Jordanian government is investigating the shooting.

cadet – n. a military school student who is preparing to be an officer