The planet Mars has gone through an ice age and is now warming up, scientists say.

The findings are based on detailed radar measurements of ice caps on Mars.

Isaac Smith studies the physical qualities of Earth and other planets -- or geophysics -- at the University of Texas. He told VOA about new research from scientists at universities in Texas, Colorado and Missouri.

Their findings were published in the journal Science.

Smith said Mars has ice ages, just like Earth has had. 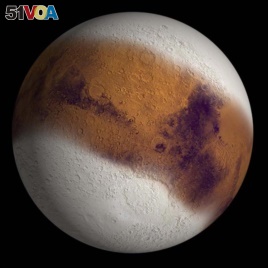 Mars is often called the red planet. But, a few hundred thousand years ago, the scientists said, the planet was not so red. Their research suggests that Mars has been warming for the past 370,000 years.

Smith said ice may have built up to a thickness of several meters around Mars during its ice ages. This would have made the red planet look more white than red.

Smith told VOA an ice age on Mars would be different than an ice age on Earth. He said, during Martian ice ages, the north and south poles would be warmer than they are now, and they would have less ice.

Warmer poles, he said, mean there would be more water in the atmosphere. The tilt and orbit of Mars and its thin atmosphere also would have a big impact on its ice ages.

Scientists are attempting to understand how Mars has changed over long periods of time. The information they gather will help scientists look for evidence of life beyond Earth.

One of the keys to life is water. The scientists said their evidence suggests Mars could have been a watery place.

Kevin Enochs wrote this story for VOANews. Jim Dresbach adapted it for Learning English. Mario Ritter was the editor.

ice age – n. a time in the distant past when a large part of the world or a planet was covered with ice

pole – n. either end of the imaginary line around which something such as the earth turns

ice cap – n. a very large and thick sheet of ice that covers the North Pole, the South Pole or another region

tilt – n. the state of having one side higher than the other