Update Required To play the media you will need to either update your browser to a recent version or update your Flash plugin.
By Dan Friedell
05 July, 2016

Monday was Independence Day in the United States. July 4 is an important holiday every year.

On that date in 1776, 13 British colonies in North America joined together to declare their independence from Britain.

Fireworks shows are a big part of the Fourth of July celebration. In many cities, crowds gather in large open spaces or along rivers to watch small rockets being fired into the air. The rockets explode high in the sky, often leaving red, white and blue streaks -- the colors of the U.S. flag. 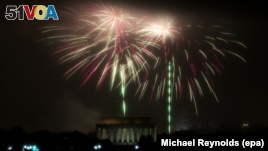 The Independence Day fireworks are set off in the fog and rain above the Washington DC skyline, with the Lincoln Memorial seen beneath; as seen from Arlington, Virginia, USA, 04 July 2016.

Some Americans say July 4 is a perfect time for fireworks because of the U.S. national anthem, The Star-Spangled Banner. The song has words like "...and the rocket's red glare, the bombs bursting in air, gave proof through the night, that our flag was still there..."

But this Monday was a rainy day in the U.S. capital, Washington, D.C. There were low clouds in the sky over the National Mall and the Capitol Building, the site of a major fireworks show. The clouds made it hard for crowds to see the fireworks.

PBS produces a television show of musical performances and fireworks on the Fourth of July.

But when the show had images of fireworks exploding against a clear, night sky, people were confused. Especially people who knew it was a cloudy, rainy night in Washington.

"The fireworks from my apartment window don't look like @pbs #fake?"

Someone else added "not cool... those shots are clearly not from tonight"

Finally, the producers of the show released a statement. They called editing the TV broadcast, "the patriotic thing to do."

One person wrote: "If I wanted that, I'd watch YouTube."

Eventually, the producers apologized for not being honest with TV viewers. They wrote that the edits were made to make the "best possible television viewing experience. We apologize..."

But that was not the end of it. One Twitter user joked: "only in D.C. could a PBS show become a scandal."

What do you think about the fireworks editing? We want to know. Write to us in the Comments Section or on 51VOA.COM.

streak – n. a long, narrow area or flash of light