Update Required To play the media you will need to either update your browser to a recent version or update your Flash plugin.
By Jim Dresbach
22 August, 2016


A famous bridge over the Potomac River is badly in need of repair.

The Memorial Bridge connects Washington, D.C. with Arlington County in Virginia. It provides drivers, runners and walkers alike a crossing between the famous memorial to President Abraham Lincoln and Arlington National Cemetery.

Tens of thousands of people use the bridge every day. But only some of them know that the large stone structure and its steel supports are slowly breaking down. 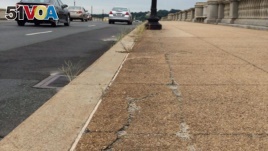 The Memorial Bridge was built in 1932. It was designed to be a ceremonial entrance to Washington. But the bridge is in need of major repair work. Money for the project has been hard to find.

The U.S. Congress approved a $90 million grant for the repairs. But an estimated $250 million would be required to fully fix the famous structure.

Close to 68,000 drivers use the Memorial Bridge daily. Many have noticed the bridge is falling apart.

"I see it every day," said Frank Lopez del Rincon, who spoke to VOA while riding his bicycle. "The cracks, people working on it...it clearly needs lots of work."

K. Seyoum, a taxi driver, also uses the bridge. He said he has experienced first-hand the difficulties of bridge repairs and lane closures, "especially during rush hour."

Temporary "quick fixes" have been made for several years. Recently, more permanent changes, such as closing the outer lanes and increasing weight limits, have drivers seeking other ways to get to and from D.C.

The U.S. National Park Service says those repairs were only temporary. Park service officials are responsible for the bridge and grounds around it.

Matthew Gilmore is a local historian and planning expert. He said the park service has been making quick, simple repairs for many years. He explained the federal agency never has a lot of money to spend.

But a major fix is needed. Without a complete repair project, the park service said the bridge will have to close to all traffic in five years. The main problem now is that the deck, or top surface, continues to break up.

Cyclist Del Rincon was surprised to hear that the park service continues to struggle to find money for the project. "I would think the government would cover that," he said.

The situation at the Memorial Bridge is found in other parts of the U.S. The American Society of Civil Engineers this year rated one in nine American bridges as "structurally deficient."

Progress in fixing the country's roads and bridges is slow. Congress has been unwilling to approve the public money needed for such repairs in recent years.

The country needs to spend nearly two times its current budget of $12.8 billion a year just to make sure American bridges stay safe and secure. That spending estimate comes from the U.S. Federal Highway Administration.

Esha Sarai wrote this story for VOANews. Jim Dresbach adapted it for Learning English. George Grow was the editor.

What famous buildings or structures in your country are in need of repair? We want to hear from you. Write to us in the Comments Section or visit our 51VOA.COM.

dismount – v. to get down from something such as a horse or bicycle

taxicab – n. a car that carries passengers to a place for an amount of money that is based on the distance traveled

lane – n. a part of road that is marked by painted lines and that is for a single line of vehicles

overhaul – v. to look at every part of something and repair or replace the parts that are broken

deck – n. a flat surface on a bridge