Update Required To play the media you will need to either update your browser to a recent version or update your Flash plugin.
By Susan Shand
27 October 2021


Egypt is worried about its supply of fresh water. To help deal with the problem, it is offering financial assistance to private companies to build 17 new desalination factories over the next 5 years.

The process of desalination removes salt from water. 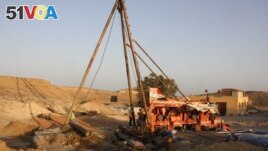 A view of work around an 84-meter well being dug to draw seawater that will be desalinated using solar power at the resort area of Marsa Shagra near Marsa Alam on Egypt's southern Red Sea coastline, Egypt, October 18, 2021. (REUTERS/Aidan Lewis)

The new factories will increase water desalination in the country by 300 percent. They will operate with solar energy.

The plan fits with Egypt's push to increase its sources of fresh water for a fast-growing population. Currently, it is facing competition for Nile River water from a large hydropower dam that Ethiopia is building upstream.

The financial assistance is designed to bring in private investment and technological development. Egypt has struggled in both of these areas.

Investment in new desalination factories would begin with the government guaranteeing to buy the water and re-sell it to its citizens and industries at a much lower price, said Ayman Soliman. He is the head of the Egyptian government's investment fund. He did not estimate how much it would cost the government.

During a proposed 25-year period of financial assistance, companies would bring in their own building teams and use renewable energy like solar power. Soliman said many companies have expressed interest in the plan.

"We've received offers to build whatever capacity we need," Soliman said. He added that there is enough demand by investors to build many more factories than planned.

The government's investment fund hopes to reduce the price of desalination by 20 to 25 percent by using renewable energy and creative financing.

Local solar energy producer KarmSolar was one of the first to publicly say it plans to bid for part of the project. It claims it can lower costs by selling electricity and water using renewable energy. It has begun building a 200-cubic-meter-per-day desalination factory at Marsa Shagra on the southern Red Sea coast. For the past five years, the company has used solar and fuel to supply electricity to resorts in the area.

"The machines for digging the wells are there, and we've put the orders for the procurement," said Ibrahim Metawe. He is the manager of the new plant, which plans to begin pumping water in the early months of 2022.

The water intake wells are set a short distance away from the sea to reduce the effects on the environment.

In sunny Egypt, excess water may be produced at the hottest part of the day. Karmsolar is considering several ways to make use of that water, including selling it in bottles.

The Reuters News Agency reported this story. Susan Shand adapted it for Learning English. Ashley Thompson was the editor.

desalination - n. the process of removing salt from something, such as water

upstream - adj. in the direction opposite to the flow in a stream

solicit – v. to ask for something from someone

capacity – n. the ability to hold or contain people or things — usually singular

bid – v. an offer to pay a particular amount of money for something

procurement – n. getting something from someone