Update Required To play the media you will need to either update your browser to a recent version or update your Flash plugin.
By VOA
11 October, 2015


Scientists in England are using two self-directed water vehicles to explore the animal and plant life of the Celtic Sea.

The Celtic Sea is a body of water off the southern coast of Ireland. The area is known for its exceptional sea life. Scientists want to know why marine animals are so attracted to this part of the Atlantic Ocean.

One of the research vehicles is powered by batteries. It collects information for the National Oceanography Center in Southampton, England, and the World Wildlife Fund. The vehicle's low energy requirements permit it to stay afloat for up to 30 days. Reports of what it finds in the Celtic Sea are sent by satellite. 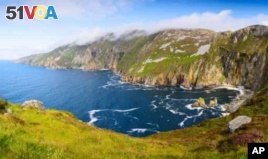 Scientists are exploring the Celtic Sea with water robots for its diverse and rich marine life.

Stephen Woodward is an engineer who helped design the craft. He says the vehicle has equipment that can detect small organisms called zooplankton and fish. He adds that other sensing devices measure water currents and other features of sea life.

The vehicle also creates a two-dimensional map of the sea.

Another vehicle is powered by solar panels and a wind turbine. It can stay afloat for months. The robotic vehicle sends information about the so-called biodiversity hotspots. A biodiversity hotspot is an area of an ocean that has a lot of plant and animal life activity.

Lavinia Suberg is one of the scientists studying the biodiversity of the Celtic Sea.

She says productive ocean areas, like the Celtic Sea, attract zooplankton. The zooplankton then attract fish. She adds that areas with a large increase of fish often attract sea mammals and birds.

Using these robotic ocean vehicles greatly reduces the cost of exploring the seas with manned laboratories. Scientists can spend more time analyzing the collected information. They say the research will give them a better understanding of the needs of the Celtic Sea for future management and protection.

Do you swim, dive or snorkel? Share what you've seen in the waters you explore in our Comments section or on 51VOA.COM.

VOA's George Putic reported this story from Washington. Jonathan Evans adapted it for Learning English. Kathleen Struck was the editor.

satellite – n. a machine that is sent into space and that moves around the earth, moon, sun, or a planet

two-dimensional -- adj. having or looking to have length and width, but not depth

wind turbine – n. a structure that has large blades attached to an engine and that is used to produce electricity

snorkel -- v. to swim and look underwater while breathing through a tube