We Can Thank Cows for ‘Vaccine’

Update Required To play the media you will need to either update your browser to a recent version or update your Flash plugin.
By Anna Matteo
28 March 2020

The spread of dangerous diseases around the world is not new.

As trade and colonization expanded worldwide over hundreds of years, so did some dangerous diseases. And smallpox was one of the worst of them.

Happily, smallpox has been eradicated, meaning it does not exist in nature anymore. The story of how smallpox was defeated is closely linked to the English word, "vaccine." 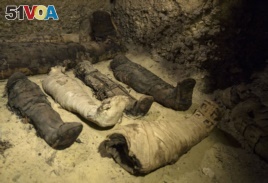 Mummies lie in a recently discovered burial chamber in the desert province of Minya, south of Cairo, Egypt, Saturday, Feb. 2, 2019.

However, before modern science made that happen, humans had suffered from the disease for a very long time. Researchers even found a 3,000 year old Egyptian mummy with smallpox scars.

Smallpox was a severe and deadly disease. The Centers for Disease Control and Prevention describes smallpox as devastating. "On average, three out of every 10 people who got it died. Those who survived were usually left with scars, which were sometimes severe."

By the 18th century, smallpox was still infecting and killing people around the world. But in England, there were some interesting stories going around about milkmaids.

Milkmaids were women who milked cows. They were known to get a mild disease called cowpox. And the scientific term for cowpox is at the heart of our story about the English word, "vaccine."

Cowpox is a disease that affects cows but can spread to humans through a scratch or cut. Cowpox would often cause a few sores, but it is not serious. Smallpox, however, can leave terrible scars at the very least and cause death at the very worst. But milkmaids did not seem to get the damaging disease.

A British doctor named Edward Jenner (1749-1823) wanted to find out if the stories were true. So, he did an experiment on his gardener's son, nine-year-old James Phipps. Jenner took material from a milkmaid's cowpox sore and injected it into the child.

Jenner performed this experiment on more people before publishing his findings, calling them: "An Inquiry into the Causes and Effects of Variolae Vaccinae."

The Latin term "variolae vaccinae" means something like ‘pustules from a cow.' A pustule is a small bump on the skin that contains or produces infected fluid or pus.

And, let's face it, pustule – whether in Latin or not – is a bit gross. So, it is the word "vaccine," based on the Latin word for cow – vaca – that stuck.

In time, vaccines became known as the substances that give immunity from other diseases as well.

And that is the story of the English word, vaccine ...

... which brings us to the end this Words and Their Stories.

scar – n. a mark remaining (as on the skin) after injured tissue has healed

sore – n. a sore or painful spot on the body usually with the skin broken or bruised and often with infection

expose – v. to cause (someone) to experience something or to be influenced or affected by something

pus – n. a thick, yellowish substance that is produced when a part of the body or a wound becomes infected

immunity – n. the power to keep yourself from being affected by a disease