‘We Were Them:’ Vietnamese Americans Help Afghan Refugees

Update Required To play the media you will need to either update your browser to a recent version or update your Flash plugin.
By Ashley Thompson
23 September 2021


Thuy Do was reminded of her own family when she saw the images of Afghans at the airport in Kabul. She saw people desperate to flee their country after the Taliban takeover.

It took Do's family many years and several failed attempts to finally get out of the country and make it to the United States. She was nine years old when they arrived. Her family had a combined $300. Each person had just two sets of clothes. 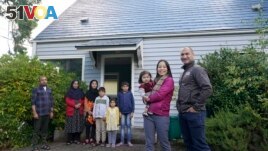 Thuy Do, second from right, poses for a photo with her husband, Jesse Robbins, right, and their son, Fredrick, Monday, Sept. 20, 2021. (AP Photo/Ted S. Warren)

Today, Do is a 39-year-old doctor living in Seattle, Washington. Because of her own family's experience, she decided to help Afghans facing a similar situation.

Do and her husband decided to offer an empty house they own to refugee resettlement groups. The groups set up the house for newly arriving Afghans in need of a place to stay.

Television images of Afghans seeking to leave on U.S. military flights out of Kabul brought back painful memories for many Vietnamese Americans. They remembered their own attempts to escape Saigon.

The crisis has also led many Vietnamese Americans to give money to refugee resettlement groups. They are offering housing and legal assistance to arriving Afghans.

Some have also said they want to offer guidance that refugees and new immigrants may need. This can include how to buy things at a food store, sign up children to go to school or how to drive a car in America.

Since the Vietnam War, hundreds of thousands of Vietnamese have come to the United States. They have settled in communities from California to Virginia. Today, Vietnamese Americans are the sixth-largest immigrant group in the country.

The U.S. had long announced plans to withdraw from Afghanistan after a 20-year war. But the military's final days in the country were much more dangerous than expected. More than 180 Afghans and 13 U.S. service members were killed in an attack on the Kabul airport.

In the last two weeks of August, the U.S. removed 31,000 people from Afghanistan. Most of them were Afghans who supported American military efforts.

But many Afghan allies were left behind, with the country now under control of the Taliban militant group.

In a similar way, many Vietnamese Americans remember how they could not get out before the fall of Saigon to communism.

Some faced long periods in reeducation camps as a punishment for helping the Americans who had fought in their country. Once they got out of the camps, many tried to leave the country by boat. They took extremely dangerous trips across the sea in hopes of making it to neighboring countries.

Thousands of people did not survive their escape.

Afghans arriving in the United States may have a special status for those who supported U.S. military operations. Some may have been sponsored to come by family members already here. Others are expected to arrive as refugees or seek permission to travel to the U.S. under a process known as humanitarian parole.

For parole, Afghans need the support of a U.S. citizen or legal resident. Some Vietnamese Americans have signed up to sponsor people they have never met, said Tuan DinhJanelle. He is with the Southeast Asia Resource Action Center.

The event also aired on Afghan American satellite television, said Bilal Askaryar. He is a spokesperson for the #WelcomeWithDignity campaign aimed at supporting asylum seekers.

"They saw the need. They saw the parallels," Askaryar said. "It's really powerful to see that they saw that link of common humanity between the Afghan community and the Vietnamese community."

Thi Do is another Vietnamese American who is doing what he can to help. Do is an immigration lawyer in California. He is helping newly arrived Afghans register petitions to have family members join them in the U.S.

Do was a young boy when Saigon fell. His father, who served in the South Vietnamese army, was sent to a reeducation camp. When his father returned, the family left Vietnam by boat in hopes of reaching a country that would take them.

Do remembers how the boat passed dead bodies floating on the water. He remembers how his father apologized for putting him and his brothers and sisters in danger.

Do's family first reached Thailand and Malaysia. But both countries forced them back out to sea. The family later made it to Indonesia, where they were processed at a refugee camp.

Do said, through his work, he has helped people fleeing persecution before. But until now, no situation has reminded him so much of Vietnam.

Do said, "I see a lot of myself in those children who were running on the tarmac at the airport."

desperate –adj. very sad or upset because of having little or not hope

status –n. the official position of a person or thing according to the law

sponsored –adj. to be supported or helped by a someone, called a sponsor, who takes responsibility for a person

parallel –n. a way in which things are similar

petition –n. a formal written request made to an official person or organization

persecution –n. to treat someone cruelly or unfairly especially because of race, religion or political beliefs

tarmac –n. the area covered by pavement at an airport