Update Required To play the media you will need to either update your browser to a recent version or update your Flash plugin.
By Mehrnoush Karimian-Ainsworth
02 June, 2016

Mass shootings have become very common in the United States, but the country remains divided over what to do about it.

Some Americans want stronger gun controls. Others say people should be free to carry guns wherever they want to protect themselves.

Three years ago, a group of teenagers from the South Side of Chicago launched a campaign. The group asked their classmates to honor Hadiya Pendleton, a victim of gun violence, by wearing orange shirts.

The color orange represents the value of human life.

The local action has grown into a national movement called Wear Orange. The hashtag #WearOrange can be seen all over Twitter and Facebook.

Many famous American buildings or structures were lit up in orange on Thursday to help spread public recognition of the movement. One such building was the Empire State Building in New York City. 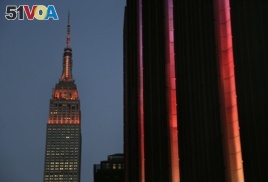 Many famous Americans and organizations expressed support for the movement.

Director, producer and actor Ron Howard advised people not to just #WearOrange, but also to take action and write to lawmakers about the issue.
The rights group Amnesty International supported the #WearOrange movement by tweeting, "Every person, everywhere, has a right to live safe from gun violence."

Victims of gun violence and their families also used social media to show their support for the #WearOrange movement.

Kate Ranta was a victim of gun violence. In her Facebook post, she wrote that she is wearing orange "for those who were injured and have to live forever with the physical and emotional scars."

Some people disagree that guns are the problem. One Twitter user wrote that "guns are not violent, people are."

Another Twitter user objected to #WearOrange because he believes that it "is another way progressives are trying to ban guns from lawful citizens."

The issue of gun safety and gun control continues to be debated across the country.

Mehrnoush Karimian-Ainsworth wrote this story for Learning English. George Grow was the editor.

What do you think about gun violence in America? Did you wear orange today, or know why others wore orange today? Please leave us a Comment, and post on 51VOA.COM, thank you!

scars – n. a mark left on your skin after a wound heals