Getting a Firm Grip on Weed Control

Update Required To play the media you will need to either update your browser to a recent version or update your Flash plugin.
By Jerilyn Watson
21 January, 2013

When is a plant considered a weed? Experts at Penn State University have a simple answer: When the undesirable qualities outweigh the good qualities.

Consider the fact that crops generally produce several hundred seeds from each plant. By comparison, each weed plant can produce tens or even hundreds of thousands of seeds. And some buried seeds can survive up to forty years -- or even longer. 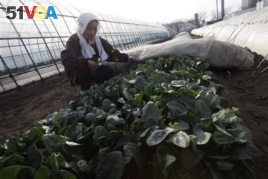 Eradicating weeds means that you have to remove all the seeds and roots so the plants will not grow back. But birds or the wind can reintroduce them to the land.

Chemical weed killers or natural treatments like corn gluten can suppress weed growth. Dense planting of a crop can also act as a natural control.

Bill Curran is a professor of weed science at Penn State, in University Park, Pennsylvania. He says one of the most common methods for suppressing weeds is dense planting.

He says a dense, competitive crop that quickly shades the soil will help suppress many weeds. The seeds need light to grow, so blocking the sun will reduce weed growth.

Other controls include turning over the soil, pulling the weeds or covering them with mulch made of shredded wood, garden waste or other material.

But even mulch has its limits. Natural resource specialists point out that weeds can be transported in mulch. This is also true of soil, grain, hay and animals.

Preventing the spread of weeds is an important part of weed management. Farm vehicles should be kept out of areas with weeds. If that is not possible, then clean off the equipment and your shoes when leaving.

Some people burn weeds or bury them deeply or make them into mulch.

Professor Curran says another way to make use of weeds is to compost them. Heat is produced in the process of making organically rich compost to improve soil. The heat will kill many, though not all, weed seeds. The same is true for seeds that pass through animals that graze on weeds.

And that’s the VOA Special English Agriculture Report, written by Jerilyn Watson. Tell us about your own fight against weeds. Share your stories at 51voa.com. I’m Jim Tedder.