Update Required To play the media you will need to either update your browser to a recent version or update your Flash plugin.
By Bryan Lynn
14 June, 2017


A Vietnamese blogger, honored by the United States for her activism, has been officially charged by the government of Vietnam.

Her given name is Nguyen Ngoc Nhu Quynh. She has been detained since October 2016 and faces up to 12 years in prison if found guilty. The law used against her has drawn international criticism for giving the government power to limit free expression. Several lawyers have offered to represent Quynh in court. 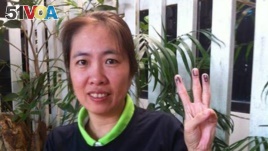 Mother Mushroom was honored with America's International Women of Courage Award in March. The U.S. State Department award recognizes the "courage and leadership" of women around the world. She was not able to attend an award ceremony in Washington led by first lady Melania Trump.

Vietnam's foreign ministry criticized U.S. officials for giving the award to someone being investigated for violating Vietnamese law.

Quynh also received the 2015 Civil Rights Defender of the Year award for speaking out freely against injustices and human rights abuses in Vietnam.

Quynh began blogging as Mother Mushroom in 2006. She is also a founding member of the Vietnamese Bloggers Network. It is one of the few independent blogging groups in a nation where the ruling Communist Party tightly controls the media and writers.

Among her recent campaigns, she blogged about the government's handling of a chemical spill at Formosa, a Taiwanese-owned steel plant in central Vietnam. The spill killed 80 tons of fish, embarrassing the Vietnamese government as images of dead fish along beautiful beaches were published worldwide.

Thousands of protesters demonstrated at the plant and in cities throughout Vietnam. The April 2016 incident is widely seen as having raised environmental awareness and activism in Vietnam.

The movement led the steel company to accept full responsibility for the fish kill. It also pledged to pay $500 million in damages for dumping toxic wastewater into the South China Sea.

An Hai reported this story for VOA Vietnamese. Bryan Lynn adapted it for Learning English. Hai Do was the editor.

conduct – v. to carry out

courage – n. ability to do something difficult or dangerous

expose – adj. cause to be known, especially something secret or dishonest

awareness – n. the state of knowing about something