Update Required To play the media you will need to either update your browser to a recent version or update your Flash plugin.
By Gregory Stachel
22 June 2022


About 100 meters from the coast of Dakar, Senegal are eight sculptures rising from the ocean floor, five meters below. The pieces of art are part of Oceanium, an ocean diving center and environmental organization in the capital of the West African nation.

Dutch and Italian artists Mischa Sanders and Philipp Putzer created the sculptures while training in Dakar.

VOA and other media were not able to visit the sculptures during a planned visit recently because of poor weather. 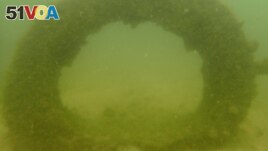 The underwater sculptures near Oceanium in Dakar, Senegal seeks to draw attention to the importance of protecting sea environments. (Oceanium of Dakar)

The works were first shown at Dakar's art event which ended this week. The goal is to bring more attention to the pollution that surrounds the sculptures in the hopes of creating a discussion about the environment.

Charlotte Thomas is Oceanium's head of communications. Thomas said, "You see, here in Senegal, the pollution is everywhere." She added, "You go into Dakar and you see waste all around you. And with the rainy season coming, it's going to go into the sea. So, if we are not protecting our land, we cannot protect our sea."

Besides Senegal's high plastic pollution, development projects over the last ten years have greatly changed the coastline and hurt the easily damaged environment. Fish stocks have greatly dropped as commercial and local fishing boats continue to use unsustainable fishing methods.

In 2015, the government passed a law banning single-use plastic, but it was never enforced. Since then, other similar laws have passed, but those never went into effect either.

Senegal-born Rodwan El Ali, the diving director of Oceanium, oversees the underwater art project. El Ali said in French, "I live underwater, and I can see that the areas that were so beautiful when I was young, today not only are there no fish left, but they've been replaced by plastic bottles, cans and all sorts of things. It's painful for me."

El Ali said he used to see large ocean animals like dolphins, whales and sharks. He said he also caught fish that were his size. Now, he said, there is hardly anything left.

"We're in a country where the environment is not a priority." He added, "Maybe [politicians] mention it in speeches, but in reality, they do nothing. No one is monitoring, no one is doing anything. You could go out to sea and do whatever you want and no one will stop you."

Since the sculptures were placed underwater in December, they have given rise to their own ecosystem. The sculptures are made of a material called clay. They are covered in sea life like barnacles, shellfish and urchins. Fish visit often to find shelter and feed on plants.

Organizers say they plan to take on local artists to create new sculptures that will be added to the pieces over time.

sculpture – n. a piece of art that is made by carving or molding clay, stone, or metal

mention – v. to talk about, write about, or refer to (something or someone) especially in a brief way