Update Required To play the media you will need to either update your browser to a recent version or update your Flash plugin.
By Dan Novak
01 June 2022


Western nations promised to send even more and better weapons to Ukraine, as Russian forces are close to capturing an important city in the east.

Germany said Wednesday it will supply Ukraine with modern anti-aircraft missiles and radar systems. And the United States' shipment will include modern, medium-range rocket systems.

Western weapons have been very important to Ukraine's success in fighting Russia's much larger and better equipped military. The supplies made it possible for Ukraine to prevent Russia from taking its capital early in the war. Russia has had to instead center its attention on the eastern industrial Donbas area. 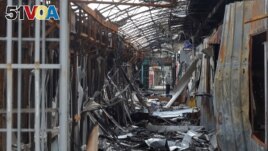 FILE - A local resident stands next to debris of an open market destroyed by a military strike, as Russia's attack on Ukraine continues, in Sievierodonetsk, Luhansk region, Ukraine April 16, 2022. (REUTERS/Serhii Nuzhnenko/File Photo)

As the war goes on, Ukraine has continued to ask for more and better weapons. Ukrainian President Volodymyr Zelenskyy has sometimes criticized Western nations for moving too slowly in sending arms. Military experts say Russia is hoping to take over the Donbas before any weapons arrive that might help Ukraine fight Russia off.

Germany has especially come under criticism, both at home and from international allies, that it is not doing enough.

German Chancellor Olaf Scholz told lawmakers that the missiles it will send are the most modern air defense system the country has. Scholz said Germany and the U.S. are working together on their moves.

One official said that the rockets, with a range of 80 kilometers, will give Ukrainian forces a greater ability to target Russian forces inside Ukraine. But they could not reach far into Russian territory.

Kremlin spokesman Dmitry Peskov told reporters Wednesday the Kremlin does not trust Kyiv's promises that the rocket systems will not be used to attack Russia.

"We believe that the U.S. is deliberately and diligently pouring fuel on the fire," Peskov said.

The announcements come as a Ukraine official said Russian forces now control 70 percent of Sievierodonetsk. The city is important to Moscow's efforts to complete their capture of the Donbas in eastern Ukraine.

Russian-backed separatists have fought Ukrainian forces for years in Donbas and the separatists already held large areas. Donetsk and Luhansk are the two areas that make up the Donbas.

Luhansk Governor Serhiy Haidai said on the Telegram messaging app that some Ukrainian troops have pulled back from the city. But he later told The Associated Press that the troops who remained were fighting in the streets.

Lysychansk is the only other city in Luhansk that Russians have not yet captured. It is still "fully" under Ukrainian control, Haidai said, but it would likely be next.

region — n. a part of a country, of the world, etc., that is different or separate from other parts in some way