Update Required To play the media you will need to either update your browser to a recent version or update your Flash plugin.
By Dan Friedell
24 October 2022


Western countries on Monday said they rejected Russia's accusation that Ukraine plans to use a "dirty bomb."

A dirty bomb is a bomb that includes radioactive material but is not a nuclear bomb.

Russia's Defense Minister Sergei Shoigu spoke with Western foreign ministers on Sunday. He said Russia suspected Ukraine of planning to use a dirty bomb in a part of the country held by Russian forces. 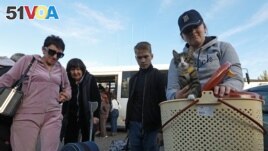 Civilians evacuated from the Russian-controlled Kherson region of Ukraine arrive at a railway station in the town of Dzhankoi, Crimea October 24, 2022. (REUTERS/Alexey Pavlishak)

Ukrainian military forces have recently started fighting in the Russian-held Kherson area. As a result, Russia has moved civilians out of the area.

The U.S., Britain, and France said they rejected Russia's concerns about a radioactive bomb.

They called Russia's statement that Ukraine would use a bomb with nuclear material within its own borders "false." The group called Shoigu's statement a "pretext for escalation."

Ukrainian president Volodymyr Zelenskyy said "if Russia calls and says that Ukraine is allegedly preparing something it means one thing: Russia has already prepared this."

He called Russia "the source of everything dirty that can be imagined in this war."

Russia told people who live in the area it controls on the western side of the Dnieper River to leave over concerns that fighting will increase.

Ukrainian fighters have been moving into the area after Russia claimed the territory as its own earlier in October.

Experts said, if Russia were to lose the territory, it would be one of its biggest defeats of the war.

The Kherson area leaders, put in place by Russia, said that any Ukrainian men who stay behind may be put into a Russian military group. Ukrainian leaders said this is a war crime under the Geneva Conventions.

Kyrylo Budanov is Ukraine's spy chief. He said Russian forces are preparing to defend Kherson, not leave it. He said reports that the city was being evacuated were not true.

He said Russia is reinforcing its military in the area but moving civilians, injured people, and important equipment away from the city.

The war in Ukraine has intensified recently as Russian forces suffered setbacks in September. Since then, Russian President Vladimir Putin has put more men into battle, claimed parts of Ukraine occupied by Russian soldiers and launched more long-distance missiles. Some of the weapons have hit power stations, leaving many Ukrainians without electricity as the long winter nears.

pretext –n. a reason that a person gives to hide the real reason that person has for doing something

escalate –v. to increase the severity or intensity of a situation

allege –v. to state without definite proof that someone has done something wrong or illegal

evacuate –v. to move or be moved out of an area because of the threat of danger