Update Required To play the media you will need to either update your browser to a recent version or update your Flash plugin.
By VOA
16 July, 2015


American and British officials met Thursday with opponents of the Iran nuclear deal. They hope to ease fears about the agreement.

In Washington, U.S. Secretary of State John Kerry met with Saudi Foreign Minister al-Jubeir. The Saudi government has expressed concern about the deal.

Afterward, Mr. al-Jubeir warned Iran not to cause trouble in the Middle East region. 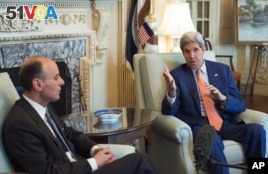 Mr. Netanyahu said the Jewish state would have preferred that Tehran change its behavior before an easing of the economic restrictions against it. He also said it is hard to understand why the agreement does not deal with Iran's call for the destruction of Israel.

Officials said the gunman first opened fire at a military recruitment center in a shopping mall. He then drove to another military center where he began shooting again.

Police fired back. The gunman was found dead after the shooting stopped. Police have not said if he shot himself or was killed by an officer.

A top Greek official confirmed Thursday that banks would reopen on Monday. Officials also said the government was considering easing restrictions on the amount of money Greeks can withdraw.

Also on Thursday, European finance chiefs agreed to give Greece a short-term loan to meet its immediate debts. The officials also agreed to open talks on a new three-year $94 billion bailout.