Update Required To play the media you will need to either update your browser to a recent version or update your Flash plugin.
By Gregory Stachel
14 March 2022


Western Sanctions are dealing a severe blow to Russia’s economy. Russia’s money, the Rouble, is dropping to record lows. Foreign businesses are fleeing, and prices in Russia are rising.

Russia's economy was suffering long before the invasion of Ukraine. That suffering is now increasing.

But a total collapse is unlikely, several economists say.

Richard Connolly is an expert on the Russian economy at the Royal United Services Institute in Britain. He said Russia has built, "an economy that's geared for conflict." 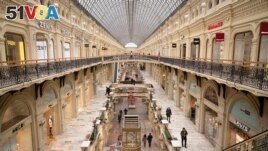 The Russian government's involvement in the economy, and the money it continues to make from oil and gas exports, will help ease the economic effects for many workers. Russia has experienced three serious financial crises in the last 30 years.

Still, the value of Russian money has fallen greatly. That will drive up prices for imported goods. Inflation was already at 9 percent before the conflict.

Sanctions have frozen a large amount of Russia's foreign money. State finances, however, are doing well with low debt. When the government does need to borrow, it can borrow money from local banks. Additionally, the government announced support this week for large companies it believes are important to the economy.

The short-term effects of Russia's economic growth have differing estimates. That is because more sanctions could come, and the fallout from President Vladimir Putin's war are unclear.

Tim Ash is a senior market researcher at BlueBay Asset Management. He said, "Russians will be a lot poorer — they won't have cash to holiday in Turkey or send their kids to school in the West — and even then, because of Putin, they will not be welcome."

He sees economic growth dropping 10 percent. Other economists see a drop of as little as 2 percent or something in between.

The long-term outlook for Russia's economy is not good, for reasons that were clear before the war. A few favored insiders control major companies and industries. Russia mainly depends on the oil and gas industry. The average amount a Russian person produces in 2020 was around what it was in 2014.

Since the collapse of the Soviet Union, foreign investments built up over the last 30 years, and jobs it brought, are leaving Russia. Large companies like Apple and Ikea have stopped sales or production in Russia. Large energy companies like BP, Exxon and Shell have said they will stop buying Russian oil and gas or leave their partnerships.

Russia's central bank has stepped in. It has attempted to strengthen the ruble and the banking system, restrict taking out foreign money from banks, and has kept the stock market closed for nearly two weeks.

The Russian government has announced measures to restrict foreign investors from fleeing. Such restrictions avoid a complete financial collapse, but they also close off the economy to trade and investment that could fuel growth.

Since facing sanctions over its 2014 seizure of Ukraine's Crimea, Russia has prepared for sanctions brought on by the West.

Connolly has written a book on Russia's reaction to sanctions. He said Russia's economy is "a durable, in some ways primitive system." He said it is based on low debt and the government controls most of the banking system. The central bank is able to intervene and support the ruble and banks.

"I'm not saying they're going to have a wonderful time. I'm saying they have the resources to deal with these problems," he said.

Trade will fall and fewer goods will be available. But the weaker ruble means the Russian government earns more money for the oil it sells because oil is priced in dollars. With recently higher prices, Connolly estimates Russia is getting 2.7 times the number of rubles from oil compared with 2019. That money can pay workers and those who are retired.

U.S. and British officials said they will ban oil imports from Russia. Europe, which depends more on Russia for energy, has held back.

cash – n. money in the form of coins and bills

seizure– n. the act of taking control of something especially by force or violence

durable – adj. staying strong and in good condition over a long period of time

primitive – adj. very simple and basic: made or done in a way that is not modern and that does not show much skill