What Are the Issues in Epic’s Court Battle with Apple?

Update Required To play the media you will need to either update your browser to a recent version or update your Flash plugin.
By Dan Friedell
19 May 2021


Apple is fighting a court battle against Epic Games that could affect how major technology companies are regulated in the future.

The trial, which began in California on May 3, is expected to last about a month. It centers on whether Apple's control over its App Store system unlawfully locks out competition.

Apple requires that nearly all third-party software developed for iPhones and other iOS devices be released through its App Store. It also requires developers to use Apple's in-app payment system, which charges commissions of up to 30 percent.

Epic, which sells its hugely popular Fortnite video game on the App Store, argues that Apple's requirements establish a monopoly.

The two companies are debating whether Apple has the right to set its own rules, fully control its payment system and remove apps from the App Store. 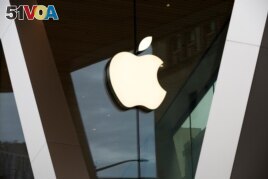 FILE - An Apple logo adorns the facade of a downtown Brooklyn Apple store in New York, March 14, 2020. Apple is heading into a trial that threatens to upend its app store that earns the tech giant billions of dollars each year.

Epic tried to avoid paying Apple by creating its own payment system for Fortnite. But Apple said the action violated its rules and the company kicked Epic out of the App Store. That dispute led Epic to bring the legal action against Apple.

Apple rejects Epic's arguments. It says its payment structure is not unusual in the industry. And it says its commissions are fair in exchange for giving developers access to a worldwide marketplace that it spent $100 billion to build.

Epic's CEO, Tim Sweeney, admitted in court that his company knowingly violated Apple's rules by creating its own payment system for Fortnite. Sweeney said Epic took the action in an effort to prove a point.

"I wanted the world to see that Apple exercises total control over all software on iOS, and it can use that control to deny users' access to apps," he testified. Epic says Apple's system makes it as hard as possible for users to stop buying Apple products and services.

Apple argues that Epic's rules violation was an attempt by the company to increase its own profits by benefiting from Apple's massive App Store structure.

Sweeney said in court that Epic is seeking to increase profits through its own app store, which charges 12 percent commissions on in-app sales. While that model is not currently profitable, Sweeney said it could be in the future.

Even though Apple's late co-founder Steve Jobs publicly said the App Store was not expected to make a lot of money when it opened in 2008, it is now highly profitable. It brought in nearly $17 billion in just the first three months of 2021.

A lawyer for Epic, Katherine Forrest, noted in court that the App Store's profit margin during 2018 and 2019 was 75 to 78 percent.

But having a financially successful App Store does not mean Apple has violated any laws. Most legal experts say Epic has an uphill battle to win the trial.

"I don't think they are likely to win," said Rebecca Haw Allensworth, a law professor at Vanderbilt Law School. However, she said the case may have already served a valuable purpose – "drawing attention to some of Apple's practices that many developers see as abusive."

Larry Downes, with Georgetown University's Center for Business and Public Policy, also predicted a court loss for Epic. "I would certainly say Apple has the stronger case under existing case law," he said.

While Apple may be in a good position to win, regulators around the world are starting to look more closely at the company. As public support for regulating big tech grows in the U.S. and abroad, Epic also launched a public relations campaign to build support for its case. The company has run advertisements accusing Apple of taking a large cut of app sales.

Karen Dunn is a lawyer for Apple. She said that rather than investing in creative solutions, Epic chose to spend money on lawyers, PR and policy advisors "in an effort to get all ... the benefits Apple provides without paying."

Joel Mitnick is a former lawyer with the U.S. Federal Trade Commission. He says the biggest threat to Apple's App Store is not court cases, but possible new regulations.

"If it were me, I would be looking at ways in which I could influence what might be inevitable changes to the rules under which (Apple) are going to operate," he said.

One judge is to make the decision in this non-jury trial. Experts say the decision will come down to a market definition. Epic's position is that the iPhone and the App Store have grown into an influential single market.

Apple argues that the market definition should include other devices, such as computers, or Microsoft's Xbox and Sony's PlayStation gaming machines. Those companies also charge developers a 30 percent commission on payments.

Downes, the Georgetown University expert, said the judge has to place herself in the shoes of consumers.

"If it's not harming consumers, then this is just a contract dispute between two companies, with one of them trying to use (legal action) to renegotiate the terms," he said.

regulate -v. to bring something under the control of a government or authority

commission -n. a payment made to someone who sells goods that is directly related to the amount sold

monopoly -n. complete control of the entire supply of goods or of a service in a certain area or market

access -n. the right or ability to approach, enter or use

profit margin –n. the difference between the total cost of making and selling something and the price it is sold for

inevitable -adj. sure to happen

consumer -n. a person who buys goods and services