What Did UN Climate Negotiators Agree to in Egypt?

Update Required To play the media you will need to either update your browser to a recent version or update your Flash plugin.
By Hai Do
21 November 2022

The agreement said that poor countries, with limited money, are most affected by extreme weather events like floods, heat waves and storms. It established a committee to set up a fund to help deal with bad weather events.

The Associated Press described the deal as marking a diplomatic victory for small islands and other nations affected by extreme weather. They won over attendees, including the United States and the European Union, which had resisted the idea of "loss and damage." They feared that such a fund could open them to legal responsibility for historic release of carbon gasses from industry and agriculture. Carbon gasses are blamed for warming the Earth's atmosphere. 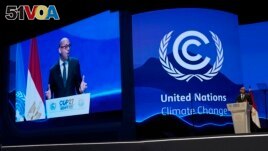 Government leaders, environmentalists and activists celebrated plans for a fund. But there are remaining questions including how it will work and who will have long-term responsibility. Here is a look at the development of the idea of paying for "loss and damage" from weather events and what is known about the fund.

The Alliance of Small Island States is a group of coastal and small island countries. In the early 1990s, the group began calling for the establishment of a loss and damage fund. The call came as the United Nations was creating a structure to limit carbon gasses at an international level.

Since then, the idea has been a part of yearly U.N. climate meetings. Developing nations and climate activists have pushed for the fund. But wealthy nations did not support the idea.

At this year's climate meeting, the idea of "loss and damage" was included in the program and became part of discussions.

The climate representative for the Marshall Islands said she was "worn out" but happy with the fund's approval. "So many people all this week told us we wouldn't get it," Kathy Jetnil-Kijiner said. "So glad they were wrong."

Who will pay into the fund?

The fund will first seek donations from developed countries and other sources, such as international financial organizations. Other nations could also join with their own offerings.

The agreement calls for "identifying and expanding sources of funding. That is something the U.S., the E.U. and other nations had pushed for during negotiations. The term suggested that other nations that are both producing a lot of carbon gasses and considered developing should also pay into the fund.

During the talks, Chinese officials said money for the new fund should come from developed countries, not China. But in 2014, China voluntarily paid $3.1 billion to the Green Climate Fund after a promise of $3 billion from the U.S. China is the world's biggest producer of carbon gasses.

In a statement, U.S. climate representative John Kerry said he would continue to press countries like China to "significantly enhance their ambition" in keeping the 1.5 Celsius goal alive. The U.N. has set a goal of limiting the increase of the average temperature of the Earth's atmosphere to 1.5 degrees Celsius.

Details about which countries will pay into the fund will be decided by a committee established in the agreement. The committee is to have 24 members. These are to include three from Africa, two from small island developing states, and two from the least developed countries in the world.

The deal says the fund will assist "developing countries that are particularly vulnerable to the adverse effects of climate change." But middle-income countries that are severely affected by weather disasters are also under consideration.

Countries that could receive funding include Pakistan, which suffered widespread flooding, and Cuba, which was recently hit by Hurricane Ian.

David Waskow is the World Resources Institute's international climate director. He said "agencies that are out there doing humanitarian work, helping people rebuild, dealing with migration and refugee crises, dealing with food security, water security" will need to see how their work fits in with the fund.

Those details will also be negotiated out by the committee in the coming year.

Attendees said agreeing to discuss the fund is a big step forward. But observers say how quickly the fund is set up will decide how happy countries will be with it.

In 2009, rich nations agreed to provide $100 billion a year to help developing countries move to energy systems that produce smaller amounts of carbon gasses. However, that plan has never been fully supported financially.

In the closing meeting Sunday, Antigua's Lia Nicholson said the committee should be set up immediately and given clear orders.

"This loss and damage fund must become the lifeboat that we need it to be," she said.

One of the main reasons that rich nations long opposed such a loss and damage fund was the fear that it would open them up to legal responsibility, called liability.

Negotiators made sure the term "liability" was not included and that money paid to the fund was voluntary.

Hai Do adapted this Associated Press report for VOA Learning English with additional material from Reuters and other sources.

fund –n. an amount of money that is used for a special purpose

enhance –v. to increase or improve