What Does It Mean to Get the 'Greenlight?'

Update Required To play the media you will need to either update your browser to a recent version or update your Flash plugin.
By Anna Matteo
16 April 2022

In many parts of the world, the flow of traffic is controlled in part by traffic lights. Typically, they have three colors: green, yellow, and red. 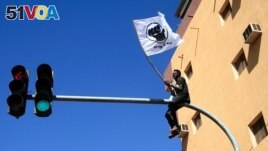 FILE - A Sudanese demonstrator sits atop a traffic light as tens of thousands protest in the capital Khartoum on Dec. 30, 2021.

But these colored lights are not only used to control traffic. When it comes to red and green, we also use those two in our English expressions.

The most common is the green light.

"Greenlight" means to have permission to go ahead with a project.

In English, we often turn verbs into nouns and nouns into verbs.

We you get the greenlight, you can proceed. You have been given consent. A greenlight is simply permission to get started!

This term is especially common in the film and theater industry. Producing films and plays takes a lot of resources. So, getting the greenlight is important.

For example, the company producing my friend's film refused to green-light production until he did a big rewrite on his script.

Now, let's listen to these two co-workers use the term "greenlight."

A: So, when are you starting your new project?

B: As soon as I get the greenlight, I can take the first step.

A: The boss gave you the go-ahead in the meeting yesterday.

B: That's not a greenlight. That's body language. For all I know, she could've been tired and her head dropped forward slightly.

A: No way. I've known her for years and that is definitely how she greenlights a project. In fact, just last week she greenlighted a bigger project than yours with just a wink.

B: That's a shockingly subtle way to authorize a project.

A: Perhaps. But also smart. If it doesn't work out, she can say she never gave consent.

B: Well, my project needs a lot of resources. So, I'm going to need more than a wink and a nod, before I proceed.

A: What more could you need?

This is also true in conversation. It means an order or directive to stop an action or project. During the pandemic, many companies put a red light on all unnecessary costs.

Although, this usage is less common than greenlight.

A red light can also mean a signal of danger or a warning. For example, always being late for work could be a red light for a larger problem. Used this way as a warning, we could also say "red flag."

There is another way we use "red light." Sometimes we combine it with the word "district." In a red light district adult entertainment is sold.

And that's the end of this Words and Their Stories! Until next time...I'm Anna Matteo.

traffic – n. the movement (as of vehicles or pedestrians) along a route

consent – n. approval of or agreement with what is done or suggested by another person

script – n. the written form of a play or movie or the lines to be said by a performer

nod – v. to bend the head up and down one or more times

wink – v. to close and open one eye quickly as a signal or hint

authorize – v. to give power to : give authority to

a wink and a nod – exp. A sly, subtle signal used to communicate a piece of information that one doesn't want to state aloud, publicly, or directly

conversation – n. a talk between two or more people : the act of talking