What Does Separation of Church and State Mean?

Update Required To play the media you will need to either update your browser to a recent version or update your Flash plugin.
By John Russell
04 July 2022

After the recent rulings, some critics say American legal traditions meant to prevent government officials from supporting religion are at risk. But others say the court's decisions made clear that governments must treat religious people the same as everyone else. 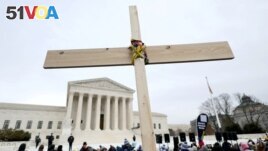 In three decisions in the past eight weeks, the court ruled against government officials. The officials put in place policies, they believed, avoided violating of the U.S. Constitution's First Amendment. Part of that amendment bans the U.S. Congress from making laws that establish a religion or prevent people from exercising their religion. This is known as the "establishment clause."

President Thomas Jefferson said in an 1802 letter that the establishment clause should represent a "wall of separation" between church and state.

The establishment clause, then, prevents the government from establishing a state religion and bars it from supporting one religion over another.

On June 27, the court ruled in favor of a Washington state public high school football coach who brought a legal case against the local school district that dismissed him. The coach had refused to stop carrying out a "quiet personal prayer" on the field after games.

And on May 2, the court ruled in favor of a Christian group that wanted to fly a flag with a cross, a sign of Christianity, at Boston city hall. The flag was part of a program aimed at promoting diversity and acceptance among the city's different communities. City officials had feared flying a Christian flag would violate the establishment clause.

In the June 27th ruling, Justice Neil Gorsuch wrote about the court's goal. He said it was to prevent public officials from being hostile to religion as they deal with the establishment clause.

Most of the religious-rights rulings in recent years have involved Christian plaintiffs. A plaintiff is a person who brings a legal action against another person in a court of law.

The court also sided with both Christian and Jewish groups in legal cases against governmental restrictions on public religious gatherings. Such limits were put in place as public safety measures during the COVID-19 pandemic.

Cornell Law School professor Michael Dorf said the court's majority appears doubtful of government decision-making based on secularism. Dorf criticized the Supreme Court's conservative justices. He said: "They regard secularism, which for centuries has been the liberal world's understanding of what it means to be neutral, as itself a form of discrimination against religion."

Being neutral means not supporting either side of an argument.

In the three recent rulings, the court decided that government actions had limited the rights to free speech or the freedom of religion. These rights are also protected by the First Amendment.

In the case involving the state of Main, Justice Sonia Sotomayor disagreed. She wrote the minority opinion for that case. She suggested that such a finding "leads us to a place where separation of church and state becomes a constitutional violation."

Those who support a strong separation of church and state are concerned that earlier Supreme Court cases could be at risk. That could include a 1962 ruling that banned prayer in public schools.

Nick Little is the legal director for the Center for Inquiry, a group that supports secularism and science. Little said, "It's a whole new door that (the court) has opened to what teachers, coaches and government employees can do when it comes to proselytizing to children."

Proselytizing means to try to persuade people to join a religion.

Lori Windham is a lawyer with the religious rights legal group Becket. She believes the court's decisions will permit greater religious expression by individuals without hurting the establishment clause.

"Separation of church and state continues in a way that protects church and state. It stops the government from interfering with churches but it also protects diverse religious expression," Windham added.

Nicole Stelle Garnett is a Notre Dame Law School professor who supported the legal effort for the football coach. She said the court was making clear that governments must treat religious people the same as everyone else.

Following the recent rulings, many issues relating to religious actions in schools might be reexamined. Officials might consider the court's reasoning that behavior must be "coercive" in order to raise establishment clause concerns.

"Every classroom," Garnett said, "is a courtroom."

Lawrence Hurley and Andrew Chung reported on this story for Reuters. John Russell adapted it for VOA Learning English.

secularism—n. the belief that religion should not play a role in government, education, or other public parts of society

interfere with – phrasal verb. to stop or slow (something) : to make (something) slower or more difficult

coercive – adj. using force or threats to make someone do something : using coercion