Political Idioms: What Did He Say?

Update Required To play the media you will need to either update your browser to a recent version or update your Flash plugin.
By Christopher Jones-Cruise
27 December, 2015

During debates -- and when they speak to reporters, supporters, aides and others -- candidates often use interesting words, phrases and expressions. In most cases, only speakers of American English can understand what these "idioms" mean.

Idioms are "expressions that have a different meaning from the meaning of the individual words that make up the idiom."

Today, we present more of these idiomatic expressions and their meanings. You may find it useful to keep this list to refer to as you read reports about the presidential campaign. 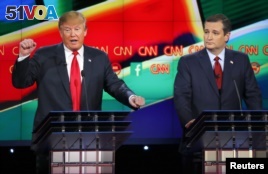 Many of the definitions in this report came from LearnersDictionary.com

What does he bring to the table? – what qualities does she have that will benefit the situation or us? How can he help us?

Take options off the table – to remove issues from a negotiation that were at one time being considered.

For example, a broadcaster reported that Congress was taking some Social Security payment "options off the table."

He's only got one shot – having only one chance to achieve a goal.

A local official considering a plan to improve roads might say: "This is a big project, and we've only got one shot to get it right."

Go the distance – to carry through a course of action to completion; to continue to do something until it is successfully completed; to do the whole amount; to play the entire game; to run the race until the end.

Political reporters often ask if a candidate has enough money, energy and support to finish a campaign: "Can she go the distance or will she run out of money halfway through?"

In the mix – included as part of a group; being considered.

A newspaper headline wondered if a local team was "in the mix" for a championship.

Gain traction – the support or interest that is needed for something to succeed or make progress.

When a bill fails to gain traction in the Senate, it does not pass.

Political expediency – often negative providing an easy and quick way to solve a problem or do something.

A candidate might ask his opponent to do the right thing, not the politically expedient thing.

Stand your ground – to not change your position when you are being attacked; to not retreat.

For example, "The candidate has continued to stand her ground despite criticism" of her plan.

Unilateral action – involving only one group or country.

"If no other country joins us, we will act unilaterally to defend our interests."

Have you been hearing or reading idioms and expressions in stories about the American presidential campaign that you don't understand? Let us know. We'll explain them in future reports.

Christopher Jones-Cruise reported this story and wrote it for VOA Learning English. Hai Do was the editor.

Have you heard expressions from American political candidates or reporters that you don't understand? Write them in the Comments section or on 51VOA.COM and we will tell you what they mean.

benefit - v. be useful or helpful to someone or something

negative - adj. harmful or bad; not wanted; not positive

achieve - v. to be successful; to get something by working hard for it