What Goes Around Comes Around, Including Roller Skating

Update Required To play the media you will need to either update your browser to a recent version or update your Flash plugin.
By Caty Weaver
21 October 2022


Have you ever roller skated? This sporty and tricky activity involves rolling around on special wheeled shoes. People do it both indoors and outdoors.

Roller skating was hugely popular in America in the 1970s and 1980s, especially among children and young adults. Now, The Associated Press reports, roller skating is back in style.

In Waltham, Massachusetts, recently, people moved around an outdoor basketball court on a cool autumn night. But none of them were playing basketball. The court is now a place to roller skate. 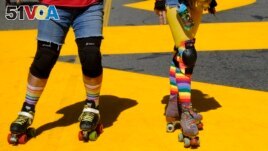 "I had my eye on skates for a while — I saw they were making a comeback," said Waltham's Tammy Donroe Inman. The 48-year-old comes to the court every few days.

"I fall all the time but it's pure joy," Inman said, with her new skates on her feet and a helmet on her head.

The COVID-19 pandemic may have helped lead to renewed interest in skating. It is an accessible, social and physical activity that can be done outdoors. It is linked with the fashion and music of the "disco" period in American culture.

Later, in the 1990s, inline skates, or roller blades, became the leading kind of roller skate.

Over time, roller skating in general dropped in popularity.

Now, you can find temporary roller skating rinks set up in parks and on roadways. Roller skating is trending on social media. Skate meet-ups in large cities worldwide are common.

New York City's Rockefeller Center held a skating rink this summer for the first time since 1940. Organizers advertised the event as "bringing the magic of the 1970s with it."

And then there are all famous people on skates.

Country music star Tyler Hubbard and rock and roller Madonna recently took some turns skating around a rink in New York's Central Park. The summer skating event was part of a disco celebration.

Skating references are common in media of all kinds lately: music videos, magazine covers, movies. Stars of music, film and the internet are among the producers.

A 2019 HBO documentary, United Skates, presents roller skating as a lively Black subculture. The filmmakers told the AP that they expected to be reporting the end of an era. But they found the opposite. As one young skater told them, "Skating's not dead. It just went underground."

Harlick Skates is a skate boot maker based in San Carlos, California. It has been in operation since 1933, but owner Jason Kuhn says roller skate sales started to take off again in 2020.

"I started seeing the orders roll in," he said.

While roller skates used to be only 20 percent of Harlick's business, they are now more popular than ice skates. "It was hard to find workers. Not everyone knows how to do this kind of work," he said.

Many adult roller skaters have not skated since they were children. This has resulted in a burst of online classes.

Nicole Fiore of Orange County, California, teaches skating skills and dance online. The 30-year-old is a four-time roller skating world champion. She often missed school because she was at competitions.

"I've never seen people roller skating in grocery store parking lots before, and suddenly they're here," she said. "I've been waiting for this moment my entire life."

A day of skating can be a serious workout. There are several forms of roller skating, including competitive, speed, dance and roller derby -- a contact sport played between two teams.

Ana Coto lives in Los Angeles and goes by the social media name @anaocto. A 2020 TikTok video of her skating seemingly effortlessly to the Jennifer Lopez hit Jenny From the Block earned 2.5 million likes and millions more views.

"There was no intention — just to feel good and feel happy, not to find something to put on TikTok," she said. "I started posting a skate journal, really for myself."

Then Coto saw that people were interested in watching her skate. Coto, who is an actor, was later contacted for appearances in a movie and has since appeared in the Dua Lipa music video, Levitating.

"It is funny. skating has given me this little foothold in the industry that I never had before."

style –n. the state of being popular

rink –n. an enclosed area with a smooth, dry or icy surface for skating

era –n. an important or outstanding period of history

trend –v. to show a tendency

boot –n. a fitted covering (as of leather or rubber) for the foot that usually reaches above the ankle