What Happened to General Electric?

Update Required To play the media you will need to either update your browser to a recent version or update your Flash plugin.
By Susan Shand
28 June, 2018


This week, General Electric was officially removed from the Dow Jones Industrial Average, a leading measure of stock prices for major American businesses.

Based on stocks, the five most valuable American businesses are all technology companies. They are Alphabet, which owns Google, Amazon, Apple, Facebook and Microsoft. 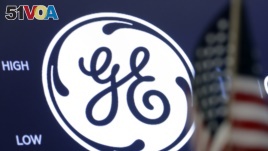 The General Electric logo appears above a trading post on the floor of the New York Stock Exchange, June 26, 2018.

Big name companies like General Electric no longer have the power or influence they once did. Instead, technology, finance and health care businesses lead the United States economy.

GE was the last original member of the Dow Jones industrials. The company was formed in 1892 when the businesses of inventor Thomas Edison joined with a competing company. The famous banker J.P. Morgan financed the deal.

In its early years, shares of GE stock were like those of a current-day high-tech company. The Dow – an industrial index – was influenced heavily by the growth industries of the day, such as railroads, copper, oil and sugar.

For a century, General Electric was at the center of American capitalism. Its chief executive officer, Jack Welch, was well-known, both across the country and worldwide. At times, GE was the most valuable American company by market value.

General Electric has had a difficult time since its stock price rose to an all-time high in May 2000. This led to a three for one stock split. Investors were given three shares of stock for each one they owned.

Over the past year, GE shares have fallen 55 percent while the Dow Jones Industrial Average rose 15 percent. This broke a major rule of the Dow: A company's stock should not be worth less than 10% of the highest price stock in the index.

The Dow industrials is a price-weighted index, which means higher priced stocks have a greater influence on its direction.

"The low price of GE shares means the company has a weight in the index of less than one-half of one percentage point," said David Blitzer, chairman of the index committee at S & P Dow Jones Indices. "Walgreens Boots Alliance's share price is higher, and it will contribute more meaningfully to the index."

But as financial reporter Allan Sloan explained in The Washington Post, GE could have stayed in the Dow through a reverse stock split. Its stock price would have gone to $130. While its market value would be exactly the same, the company would have increased its influence in the Dow.

But being pushed out of the Dow was low on General Electric's lists of concerns.

GE has been coming apart since the Great Recession 10 years ago. The weak economic conditions showed that the company was heavily dependent on its finance business, GE Capital.

Writing in The Wall Street Journal, reporter Andy Kessler wrote "GE was basically a giant hedge fund—a bet on its finance unit, which contributed half of GE's profits."

At the end of 2001, Jeffrey Immelt became the company's chief executive. Under his leadership, the value of GE Capital grew to more than $500 billion. The business expanded through a combination of loans, leasing agreements, equity finance and insurance products.

But when the recession hit, GE had to take $3 billion from Warren Buffett to meet its short-term debts.

"GE have been unwinding this hedge fund ever since," wrote Kessler.

John Flannery became the company's CEO in the summer of 2017.

Last autumn, he warned that GE's power-generation business was hurting. The company cut its dividend for only the second time since the Great Depression. In January, GE surprised investors by taking a big charge and setting aside $15 billion to pay for debts held by GE Capital, the company's financial services business. In January 2018, GE announced a $10 billion loss. It also announced plans to sell off $20 billion more in equipment and other assets.

GE investors chase profits instead of earnings and for a long time the company showed profits, right up until it didn't.

Susan Shand wrote this story for Learning English. George Grow was the editor.

stock – n. a share of the value of a company which can be bought, sold, or traded as an investment

original – adj. existing first or at the beginning

index – n. a number that indicates changes in the level of something (such as a stock market) when it rises or falls

executive – n. a person who manages or directs other people in a company or organization

contribute – v. to give (something, such as money, goods, or time) to help a person, group, cause, or organization

reverse – adj. opposite to what is usual

hedge fund – n. a group of investors who take financial risks together in order to try to earn a lot of money

dividend – n. an amount of a company's profits that the company pays to people who own stock in the company