What Happens to Pets When Couples Break Up

Update Required To play the media you will need to either update your browser to a recent version or update your Flash plugin.
By Anna Matteo
19 July 2021

In the United States, the law views domestic animals, or pets, as property when married people legally separate. 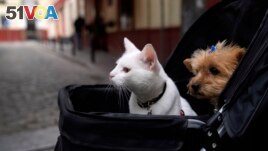 A cat and a dog sit inside a baby stroller in Seville, Spain, Saturday, June 19, 2021. (AP Photo/Thanassis Stavrakis)

Now, American courts are seeing new ways of deciding custody of the family pet. Special negotiators are being employed to argue for pet "parents." Some couples are even signing contracts before they marry about pet ownership if the marriage ends. These so-called "petnups" are designed to avoid possible courtroom disputes in the future.

Petnup is a play on the word "prenup." Prenup is short for "prenuptial," a contract that some couples seek before marriage. Prenups usually deal with property rights.

In some U.S. states laws permit judges to decide pet custody based on the best interest of the animal under consideration.

New York lawmakers are considering such a bill. New York State Senator James Skoufis is the main supporter of the New York measure. He also has a cat named Ruth, for the late Ruth Bader Ginsburg.

Skoufis spoke to the Associated Press about the proposed legislation.

"Someone's cat or someone's dog is a part of their family and should not be treated like a piece of furniture...," he said.

Adam Citron is a New York divorce lawyer. He says pet custody is always a difficult issue. So, he supports prenups that include pets. A petnup can be especially helpful when people get animals during the marriage.

He added that pet custody is far more emotional and difficult to settle than ownership over a set of dishes or a car. In states without these laws, Citron suggests this: Before a couple gets an animal, they should decide whose name will appear alone on registration or ownership papers. That person should pay any costs linked to the pet with their own money.

Some negotiators say they work to solve pet disputes through shared custody. Others say that that is not always best for the animal, especially dogs. Dogs are most often at the center of pet custody disputes.

Miles Mason Sr. is a divorce lawyer in Memphis, Tennessee. He told the AP about one couple's especially heated pet custody battle. He said the wife and husband fought about their two German shepherd dogs. The wife had taken training to better control the large dogs. The husband had not. Before the divorce, the husband lost control of one of their dogs while on a walk. It attacked and killed another dog. The wife argued later that the husband should not get custody of their dogs because he could not control them.

When the couple separated, the husband wanted to visit their dogs. A judge agreed, but said the visits must be supervised and take place at the wife's home. However, the judge said he could reconsider the decision if the man sought training on how to control German shepherds.

"We believe the judge had experience with German shepherds because he understood the concerns with highly trained and disciplined dogs," the lawyer said.

"Part of what I try to help people understand," she said, "is that even if a dog feels like a child in your heart, it isn't..."

In fact, treating your pet like a child could do harm to the animal. Visitation schedules or shared custody, Nafte said, can be far harder on a dog than a permanent separation. A dog moving between two homes on a usual basis, she said, can lead to behavioral problems.

She added that expert advice can help. "A lot of times," she said, "people just don't know what to do. They just don't want to say goodbye to their dog."

Nafte suggested putting pet custody at the top of divorce negotiations. It can make the rest of the process run more smoothly.

Marriage expert Sharon O'Neill has helped couples through divorce in New York's Westchester County for more than 20 years. In one case, during a discussion with a couple, a wife demanded that she must keep the dog. However, her husband did not believe she cared enough to take responsibility for the animal.

"In working with her alone, I came to understand that it had more to do with hurting her husband because she truly believed he loved the dog more than he had ever been capable of loving her," O'Neill said.

The mental health adviser said the couple was able to get to the truth through talking. They agreed that he would get the dog and she would get a set of furniture.

Leanne Italie reported this story for the Associated Press. Anna Matteo adapted it for VOA Learning English. Caty Weaver was the editor.

custody -n. law : the legal right to take care of a child (such as a child whose parents are divorced)

furniture -n. chairs, tables, beds, etc., that are used to make a room ready for use

divorce -n. the ending of a marriage by a legal process