What Happens with 'Too Many Cooks in the Kitchen'?

Update Required To play the media you will need to either update your browser to a recent version or update your Flash plugin.
By Anna Matteo
20 July, 2019


Now Words and Their Stories from VOA Learning English.

On today's show we go into the kitchen.

The kitchen is not just where we prepare meals. In many places, the kitchen is the heart of the home. It is where we start our day with a cup of coffee or tea. It's where we connect with our family and friends. We talk about our days while we make dinner or have a bite to eat. The kitchen is where we feed ourselves, body and soul. 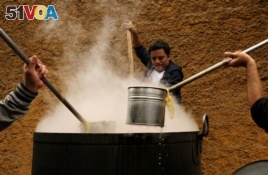 Volunteers cook soup called 'porciuncula' during a religious activity at the convent of Los Descalzos, in Lima, Peru, August, 2017.

That's right. Imagine you are cooking dinner for your friends. As you are making the soup, your friend Sara tastes it and says, "This needs more salt." So, she adds more salt.

Then Harlan comes into the kitchen. He tastes your soup and says, "You didn't put enough pepper." So he grinds some fresh black pepper into the pot and some dried herbs.

Cecilia sees him. She tastes the soup and says, "You forgot vinegar. It's my secret ingredient." Then she pours in some vinegar.

You are happy to spend time with your friends. But, quite frankly, all their opinions about your soup are becoming annoying. Worst of all, you taste the soup and it's awful!

And that is where we get the expression "too many cooks spoil the soup." You may also hear this expression with "broth" or "dish" instead of "soup." You can also say simply, "Too many cooks ..." and English speakers will know exactly what you mean.

This expression describes an age-old problem: If too many people help to complete a task, it may not go very well. Too many people in the "kitchen" – or too many people trying to do the same task – can turn the situation into a hot mess.

But, you may ask, "If many people are trying to get something done, the task will get done faster." After all, American English also has the expression "many hands make light work." (This would be the opposite of "too many cooks in the kitchen.")

To answer that point, I will draw your attention to the word "cook." Now, the cook is the leader in the kitchen. They may have assistants to help them. But the cook has the final say.

So, what if a kitchen has many cooks? Who is the leader? Everyone! And that's where the trouble comes in.

Maybe you have experienced this. Let's say you are trying to do something – for example, decorate your living room. You have picked your paint and made a plan to rearrange your furniture. Then some friends come over to help. You think they are just going to do the heavy lifting and take your directions.

However, your friends think you should listen to their design ideas – like Marcus. He mixes your pale yellow paint with some dark red and covers the walls with a color you hate.

Your friend Winnie has strong opinions about the furniture. She replaces your couch and chair with big pillows. "But where will I sit?" you say. She answers, "On the floor. Look how much more room you have!"

Meanwhile, Talia decides to put red light bulbs in all your lamps and lights.

When they leave, your living room looks dark, orange, empty, scary and awful! Your mom comes over to see the results and asks, "What happened?!" You can simply answer simply, "Too many cooks, Mom. Too many cooks."

Know that you can use this kitchen expression in any situation. Let's hear it used at work.

Manuel, do you have a minute? I'd like to talk to you about an upcoming project.

Sure. What's the project?

Yes, I would! Thanks.

Great! You'll have to work with our in-house graphics department as well as our new writing staff.

Sure. But I want to be the leader of the project. If there are too many cooks in the kitchen, the project could fail.

I totally agree. You are in charge.

In other words, having too many managers and not enough workers is not a good situation.

Actually Anna, I think we should end with a new theme song.

Thanks, Bryan. But I've already picked out a song to end with, so...

But you are going to love it! I'm just going to play it for a second or two.

Thanks Bryan. But there are one too many cooks in the Words and Their Stories kitchen!

Anna Matteo wrote this story. Kelly Jean Kelly was the editor. The song at the end is The Colonel singing "Too Many Cooks in the Kitchen."

stew – n. a dish of usually meat with vegetables prepared by slow boiling

broth – n. liquid in which meat, fish, cereal grains, or vegetables have been cooked

smoothly – adv. to remove problems or difficulties from a situation

hot mess – n. informal : something or someone that is emphatically a mess: such as : something in a state of extreme disorder or disarray

many hands make light work idiom : used to say that people can do things more quickly and easily when they work together

in-house – adj. existing, originating, or carried on within a group or organization or its facilities : not outside

graphics – adj. relating to the artistic use of pictures, shapes, and words especially in books and magazines